On May 17, 2010—the anniversary of the landmark civil rights case Brown v. Board of Education—five students (Tania Unzueta, Mohammad Abdollahi, Yahaira Carrillo, Lizbeth Mateo and Raul Alcaraz) staged a peaceful sit-in in Senator John McCain’s Tucson office to support the Development, Relief, and Education for Alien Minors (DREAM) Act.  Knowing they risked deportation, these students sought to catalyze a grassroots mobilization in favor of the DREAM Act.  Meanwhile throughout the nation, college campuses hosted lectures and panels to inform their communities of the public policy affecting undocumented students.

Public policy arguments in favor of the DREAM act rely on “the assumption [that] the contributions made by undocumented immigrants outweigh their overall costs to society.” (Youngro Lee, To Dream or Not to Dream: A Cost-Benefit Analysis of the Development, Relief, and Education for Alien Minors (DREAM) Act, 16 Cornell J.L. & Pub. Pol’y 231, 245 (2006) (discussing policy arguments for and against the Dream Act)).  Arguments in opposition to the passage of the Act rest on the illegality of undocumented students, the division between rights granted to citizen versus non-citizens, and issues relating to national security.  Id. at 251–53.

Despite the national campaigns in support of the educational reform, the DREAM act was not enacted in 2010 and there is yet to be a national education policy to address the needs of undocumented students.  But hope is on the horizon, as indicated by California Governor Jerry Brown, who recently signed legislation to extend state financial aid eligibility to undocumented immigrants.  It is evident that a strong appreciation for this country and for the value of higher education is at the forefront of this movement.  The Latin American Student Association and Cornell Advocates for Human Rights recently hosted a lecture at Cornell Law School with Isabel Castillo—a remarkable DREAM Act activist and undocumented youth.  Kemi Bello, Texas-based policy writer and co-fouder of the student group DREAM Activist, discusses the story of Isabel Castillo below. 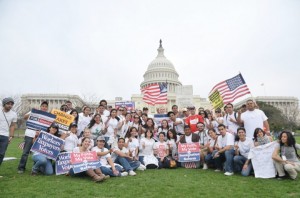 “I had two options after college graduation: one – idly wait for our immigration laws to change; or two – reclaim my humanity, declare myself undocumented and unafraid, and be at the forefront of the immigrant struggle.  As cliché as it sounds, I chose option 2, to be the change that I wish to see.”

Those are the words of Isabel Castillo, an undocumented youth and advocate from Harrisonburg, Virginia.  She recently spoke at Cornell Law School on her personal experiences with the broken immigration system in the United States.

Isabel was brought to the United States at the age of six.  Her parents, whose schooling in Mexico ended after the third grade, wished a brighter future for their children.  Isabel began her schooling in Virginia and graduated in the top ten percent of her high school class, before earning a bachelor’s degree in Social Work from Eastern Mennonite University.  However, due to the limitations and long backlogs of our immigration system (both of which emphasize the detention and deportation of undocumented immigrants), Isabel cannot practice in her field nor live her life free of the fears resulting from her lack of documentation.

Congress came close to codifying the DREAM Act in December 2010.  Though it passed the House, the Act was just a few votes shy of the majority needed in the Senate.  Without a viable legislative solution, undocumented youth continue to face detention and deportation.  They are forced to say goodbye to the only country they have known since they were six years, two years or even two days old.  Isabel’s story is not unique, as hundreds of thousands of undocumented youth share her struggle.  They continue to highlight the need for the passage of legislation, like the DREAM Act, that will reform our immigration system.