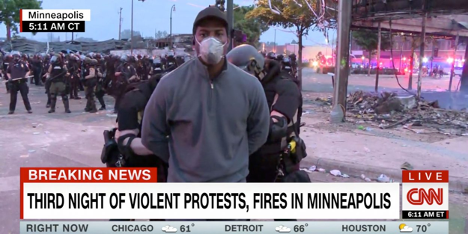 Journalism is often referred to as the Fourth Estate because of the central role it plays in the political system. From the beginning of the United States, the importance of a free press has been recognized and given special consideration. From Thomas Jefferson’s famous words: “[W]ere it left to me to decide whether we should have a government without newspapers or newspapers without a government, I should not hesitate a moment to prefer the latter[,]” the importance of a free press has been repeatedly affirmed by the nation’s leaders.

The importance of journalism to our society is never more visible than during periods of civil unrest. Brave journalists risking their safety to tell the stories of protestors is essential to achieving wide-reaching change through protest. The work of journalists in these situations both amplifies the voices of the protestors and serves as a check on the government’s ability to limit the rights of the protestors. In many cases, police officers who commit violent misconduct would not face consequences if not for video evidence recorded by journalists or ordinary citizens.

However, for journalists to serve their essential role during acts of protest, their constitutional right to report must not be infringed upon. Throughout the recent wave of protests following the murder of George Floyd in Minneapolis, we have seen countless instances of police violence against both protestors and members of the media. The US Press Freedom Tracker cataloged over 100 instances of violence against journalists from May 28 to 31. The organization found that at least 19 reporters had been arrested, at least 36 journalists had reported being shot at with projectiles such as rubber bullets by members of the police, and at least 76 members of the media had reported assaults with 80% being perpetrated by police. Around the country, police officers have targeted media members: shooting them with less-lethal rounds, tear gas, and pepper spray. These tactics have even caused multiple journalists to lose eyes. Unsurprisingly, reporters of color have been treated differently than their white counterparts. On May 29, Black and Latino CNN reporter Omar Jimenez was arrested live on air while asking the police where his crew should set up; meanwhile, his white colleague Josh Campbell, who was reporting nearby, was just politely asked to move.

Perhaps one of the most publicly egregious infringements on the media’s ability to report during this flashpoint was the City of Cleveland’s police department announcing that media members would not be allowed into the city’s curfew zones, which included the entirety of the downtown area. The city’s mayor later reversed the decision, but it was a grave moment that left reporters in Cleveland confused at the contradictory orders. This instance was significant because media members are generally exempted from curfew orders.

Importantly, state restrictions on the press during protests is not something new. In 2017 “nearly half of all press freedom incidents—such as arrests of and attacks on journalists, as well as searches and seizures of newsgathering equipment—occurred at protests.” Likewise, during the 2014 protests in Ferguson, Missouri, reporters faced many of the same obstacles they do today—arrest, harassment, and uses of less-lethal force.

Now, what legal protections do members of the media have in these instances, and do they differ from that of normal citizens?

Firstly, journalists and protestors alike are protected by the First Amendment: “Congress shall make no law respecting an establishment of religion, or prohibiting the free exercise thereof; or abridging the freedom of speech, or of the press; or the right of the people peaceably to assemble, and to petition the government for a redress of grievances,” which is incorporated to the states by the Fourteenth Amendment. The term “freedom of expression” is often used to describe the collection of First Amendment rights not directly concerning religion.

Whether or not the institutional press is afforded different rights than that of the general public is a complicated question. The First Amendment does include “of the press” as a separate clause, but the Supreme Court has routinely held that the institutional press is not afforded a higher standard of protection than that of other speakers. This is clearly borne out in Chief Justice Burger’s concurring opinion in the 1978 case First Nat’l Bank of Boston v. Belotti. The Chief Justice asserts that “The Court has not yet squarely resolved whether the Press Clause confers upon the ‘institutional press’ any freedom from government restraint not enjoyed by all others.” But he then goes on to discuss at length his skepticism at the idea that the Framers meant to create a special role for the “institutional press,” concluding that there is “no fundamental distinction” between the speech and press clause. Rather, the press “merited special mention simply because it had been more often the object of official restraints.” Despite this shaky argument, Chief Justice Burger does then correctly point out the fundamental problem with interpreting the Press Clause: how to define the press.

Not every Justice has taken the same view towards the Press Clause, and a few months later in Houchins v. KQED Inc., Justice Stewart wrote in his concurring opinion: “That the First Amendment speaks separately of freedom of speech and freedom of the press is no constitutional accident, but an acknowledgment of the critical role played by the press in American society. The Constitution requires sensitivity to that role, and to the special needs of the press in performing it effectively.”

Due to the nature of the press, media entities often find themselves as litigants in cases concerning First Amendment rights. Because the courts are reticent to decide cases under the Press Clause, rights are often defined under the speech aspects of the First Amendment even when members of the press are the ones litigating. This has led to a sizeable collection of rights that, while applying to all citizens, have special importance to the press.

Importantly for journalists covering protests, especially those organized because of police violence, there is a right to film the police under the First Amendment. Reporters and ordinary citizens alike can, while in a public space, photograph and video (without audio) anything in plain view. Recording video with audio can have different implications though and some states have passed laws trying to regulate video audio under wiretapping laws. Generally, though, audio recording of the police is allowed because they do not have an expectation of privacy when carrying out their official duties in a public setting. Journalists should still exercise caution because in states such a Pennsylvania conversations in public spaces can be considered private and those could be picked up incidentally while lawfully recording the police.

Journalists must also be cautious while on private property as owners can ask anyone to leave under threat of arrest for trespassing. Police officers can also lawfully order reporters to move or stop their activities, but only if they are legitimately interfering with police operations. Even so, thanks to the Fourth Amendment, police officers cannot usually search the contents of a phone or camera without a warrant, even if arrested. Generally there is a recognized Fifth Amendment right to not give up a device’s passcode; however, there are split opinions on whether or not a person can be compelled to use biometrics—fingerprint or face scans—to open a device. Journalists should also be protected against stop and frisks because police officers cannot initiate a “Terry” stop—as they are called—without an objective reasonable belief that the person is armed and dangerous. If a reporter’s constitutional rights are violated, they could bring a civil suit under 42 U.S.C. §1983, but the offending officer could be protected under qualified immunity.

Despite the Supreme Court’s tendency to neuter the Press Clause, the institutional press is often afforded some special privileges in civic life. Credentialed reporters are often allowed places that the normal public is not, such as in areas under curfew. And whether or not the inclusion of members of the media in curfew orders violates the First Amendment is an unsettled question of law. This suggests that, though the press may not be given unique deference in the courts, as a policy matter some special privileges are often rightly granted.

The law and these special privileges are still not enough to adequately protect journalists from being inappropriately arrested and harassed by law enforcement during demonstrations of civil unrest. More legal protections are clearly needed, and one that would make a big difference to protect both journalists and regular citizens would be outlawing the use of emergency curfews. Curfews are often used to make otherwise completely legal actions illegal. They are also often enforced selectively and have historically been used in the United States to control people of color. Even if credentialed members of the press are technically exempt from most curfews, they are often not exempt from improper harassment by law enforcement when curfews are enforced. To make matters worse, many tactics police use to enforce curfews such as deploying tear gas and kettling are indiscriminate and affect everyone in an area.

It is unclear if curfews are even effective in reducing unrest, and some experts believe they can work to create more unrest. One thing is clear though, curfews often lead to increased violence from law enforcement against reporters and citizens alike. Laws banning the use of emergency curfews could and should be passed to protect our journalists and our communities.

About the Author: Hayden Rutledge is a 3L at Cornell Law School. He grew up in Tennessee and has a political science degree from Belmont University. Hayden has been a member of Cornell’s First Amendment Clinic and enjoys writing pieces on pressing issues and First Amendment concerns.