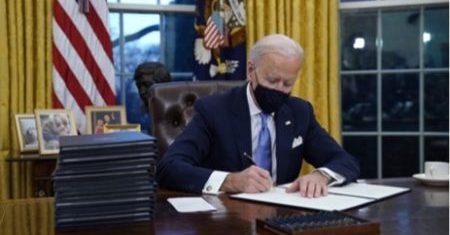 Appeasing environmentalists and Democrats, President Joe Biden recently signed an executive order halting progress on the Keystone XL Pipeline, a perennial project to construct an underground pipeline that would distribute 830,000 barrels of crude oil every day from Calgary, Canada to the Gulf of Mexico. The executive order fulfilled one of President Biden’s campaign promises, creating a perception of political fealty on day one of his presidency. The decision was, however, simultaneously met with criticism by some Republicans, who have suggested that Biden’s inaugural commitment just hours earlier to unify the country, which is reeling from partisan division, was fleeting or disingenuous. President Biden should reverse course on his mandate to nix the pipeline and on his twin mandate to temporarily prohibit the issuance of new permits for fracking on federal lands. This environmental dyad has, thus far, stagnated environmental progress, destroyed thousands of current and future American jobs, and imperiled the bipartisanship Biden has sought to court with Republicans.

The most self-defeating, even shortsighted, aspect about President Biden’s environmental dyad is its lack of any salutary effect on the environment. His nixing of the pipeline merely swaps one method of oil distribution for a dirtier and lengthier one. That is, the pipeline cancellation results in a shift from transporting oil cleanly in underground pipes across shorter distances towards transporting oil filthily through other methods such as tankers, trucks, and trains across expanses of ocean, highway, and railway. As the Obama Administration’s State Department reported, abandoning the pipeline’s completion would raise CO2 emissions by forty-two percent. Beyond emitting less carbon dioxide, pipelines are far safer than trains, tankers, and trucks, resulting in fewer oil spills and leaks. Even when pipeline-related spills do occur, they are more easily contained than non-pipeline spills.

President Biden perhaps believed, quite myopically, that his halting of the pipeline would reduce American consumption of Canadian crude oil and thus reinforce his call for more renewable energy. No such trend is occurring. In fact, despite the pipeline’s cancellation, the United States is projected to import a record amount of Canadian oil in 2021. Far from stymieing distribution of crude oil from Calgary to America, Biden’s nixing of the pipeline has only encouraged increased use of alternative methods to distribute oil to the United States. Such methods, including via trucks, tankers, or trains, are “more energy intensive” and more hazardous for the environment than underground pipelines.

The sheer scope of the project explains why the worst byproduct of its cancellation was the upending of many Americans’ lives. With his signature, President Biden destroyed 11,000 Americans’ current and future jobs, many of them blue-collar workers striving to support their families during the pandemic. Shockingly, among them were 8,000 union workers, one of the very constituencies that helped propel Biden to electoral victory in November in the swing states of Wisconsin and Michigan. Despite recently promising to be the “most pro-union president you’ve ever seen,” he was ready on his very first day in office to eliminate many of their jobs in order to appease environmentalists.

President Biden’s environmental dyad violated another of his campaign promises, one that promoted domestic jobs over foreign jobs. His ban on new permits for fracking on federal lands restricts oil companies’ very ability to expand fracking in the United States and encourages greater dependence on oil fracking abroad. Additionally, President Biden’s environmental dyad has contravened the economic objectives of some indigenous groups and Canadians. The Ute Indian Tribe dubbed Mr. Biden’s ban on fracking a “direct attack” on its sovereignty for treating Indigenous land as federal land and for harming its nation’s economy. In addition, Indigenous Canadian groups invested “nearly $764 million in the pipeline.” Given such investments and the 1,000 Canadian jobs lost due to the pipeline’s halting, it is no surprise that Canadian Prime Minister Justin Trudeau is disappointed by the pipeline’s cancellation. To be sure, many Canadians and some indigenous groups are pleased by the pipeline’s halting, but opposition to it by some indigenous peoples, union workers, and at least one major foreign ally suggests that blocking the pipeline achieved mixed results for Biden.

President Biden’s inaugural speech was praised by the news media for his outward commitment to democratic norms. But, more than anything else, his speech was a call for unity. “[There is] [m]uch to repair. Much to restore. Much to heal. . . . [T]o restore the soul and to secure the future of America . . . requires that most elusive of things in a democracy: Unity. Unity,” Biden resolutely repeated. For a devotee of healing after the insurrection at the U.S. Capitol and after months of protest and unrest, President Joe Biden’s environmental dyad instead reinforced partisan discord and disunity. He jeopardized the bipartisanship he sought with Republicans, who view his executive orders as harmful to free markets and to American energy independence, both of which they prize. Another reason Biden increased partisan friction is that the pipeline was one of Republicans’ previous legislative priorities. Indeed, it supported the oil industries and economies of several Republican states, and its execution had been underway for over twelve years.

Although politicians often undertake actions favored by supporters and disfavored by opponents, most will not typically sacrifice an immense amount of bipartisan goodwill for a policy that hardly advances their agenda. President Biden apparently is not typical. His environmental dyad does not help the environment, yet he sacrificed so much partisan goodwill to achieve it, including his air of unity, the sovereignty of the Ute Indian Tribe, and thousands of American jobs.

About the Author: Mike Oaks is a JD/MBA candidate at Cornell for the class of 2022. Before attending Cornell, Mike earned a bachelor’s degree in English Language from Brigham Young University and worked as an operations analyst at Morgan Stanley, account executive at Qualtrics, and congressional intern for House Representative Mia Love. Mike is currently an associate on the Cornell Journal of Law and Public Policy.