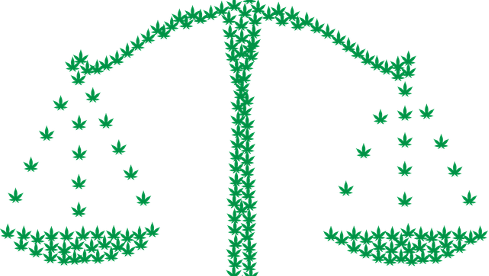 On Election Day, November 3, 2020, voters in four states, New Jersey, Arizona, Montana, and South Dakota approved the legalization of recreational marijuana in their states. These referendums, known as ballot initiatives, allow voters to participate in the state’s policymaking process by inviting them to vote on a proposed law. Prior to the 2020 election, nine states and D.C. legalized recreational marijuana through this method. Some ballot questions contained very general language concerning taxation and regulation. Now, eight years after the first successful legalization efforts in Washington and Colorado, the political conversation has evolved beyond rudimentary concerns.  This past year, criminal justice was on the ballot nationwide, allowing voters to impact state and local policies.  Now, there is a broader dialogue about legalizing recreational marijuana as a means of social and criminal justice reform. Many advocates of marijuana reform hope to wield this democratic tool to ensure that it would protect those who have been or would be harmed by marijuana’s criminalization.

In light of the many historic moments of 2020 that have shed light on racial disparities and injustice in the United States, it is appropriate to address these key concerns in the ballot initiatives. In Arizona, the approved ballot measure included the fundamental concerns of taxation and regulation but also allowed for the expungement of some criminal marijuana offenses. Montana’s proposal went a step further; because the voters approved, the law permits expungement and resentencing for certain offenses. These provisions are important because police arrest Black people for marijuana possession at three times the rate of others in Arizona and over nine times the rate of others in Montana. These arrests have long-lasting prospective consequences, impacting access to jobs, housing, and even voting in some states. The ramifications of marijuana arrests facilitate racial disparities in the country.

New Jersey’s ballot initiative included standard tax and regulatory terms, but it remained noticeably silent on social justice provisions. In 2018, during his gubernatorial campaign, now-Governor Murphy promised marijuana legalization, seeing it as a solution for social justice and imbalance in incarceration rates. Black people represent about 14% of New Jersey’s population but 54% of the state’s prison and jail population, not including New Jersey’s parole and probation system. Further, between 2010 and 2018, New Jersey law enforcement arrested Black people for marijuana offenses at a rate 3.5 times higher than white individuals.

Proponents of legal recreational marijuana advocated for a legislative solution to ensure that the bill centered around racial and social justice. Despite attempts to legislate, in May 2019, state lawmakers ceased efforts, pushing the question onto voters in the 2020 general election. This decision may be politically motivated, but it is nonetheless socially irresponsible and morally remiss. State legislators’ capitulation allowed law enforcement to arrest nearly 100 people per day for marijuana-related offenses, amplifying injustice in the state. Further, voters were forced to support or oppose amending the state’s constitution without committing lawmakers to the finer points of that legislation. New Jersey successfully passed some reform with the Clean Slate Bill, allowing individuals who have been crime-free for ten years and who have not been convicted of more serious or violent offenses to petition for expungement. However, this victory should not come at the expense of New Jerseyans getting a say in social justice reform in connection with the legalization of recreational marijuana in the state.

The shortcoming is significant because state lawmakers could not reach an agreement on the legislation previously. As roughly 65% of New Jersey voters supported the ballot initiative before the election, it is unlikely that a decision to exclude social reform measure serves as a tactic to gain support from voters. The bare language of the constitutional amendment passed by voters puts key issues in limbo without committing the legislature to specifics, leaving the legislature to create the recreational program.  Despite the flaws in the ballot initiative, the language was there on election day, and voters approved it. This vote could have ceased the accumulation of injustices advanced by disproportionate marijuana arrests in the state, an admirable social justice achievement for New Jersey. Unfortunately, it fails to guarantee justice and relief for all of those harmed by the drug war. Worst of all, it permits the legislature to evade reform, leaving meaningful social justice efforts hanging in the balance.

Governor Murphy set a deadline for January 29 to pass the marijuana reform legislation that has been stalled because of his concerns about the law’s inadequate punishments for underage marijuana possession. The punishment in the legislation that Murphy refuses to sign is identical to the punishment for underage alcohol consumption, and its supporters contend that the goal is to reduce the number of minors in the criminal legal system. While politicians clash on the specifics of the legislation, officers in Newark, New Jersey, the largest city in the state, are still arresting for marijuana offenses at a similar rate as before the legalization because the laws in place still make marijuana use and possession a criminal act. The political battle to punish those engaging in underage cannabis use more harshly than those engaging in underage drinking is a deterrence policy that would implement fines and non-criminal penalties for minors using marijuana and could perpetuate the existing racial disparities in punishment that already exist in the state.

Given that the voters approved the ballot initiative, legislators were not compelled to enact a law that includes social and criminal justice measures, but they should voluntarily accept this duty. It is in New Jersey’s best interest to use this referendum as a springboard for social justice reform; lawmakers must quickly pass additional legislation that includes expungement and resentencing measures. Reform is long overdue, and New Jersey needs to redress prior harm as well as prevent future suffering to ensure meaningful change.

About the Author: Annie Gilligan is a second-year student at Cornell Law School. Annie graduated from Rutgers University in 2018 where she studied History, Communication, and Labor Relations. This summer she interned with the District of New Jersey.