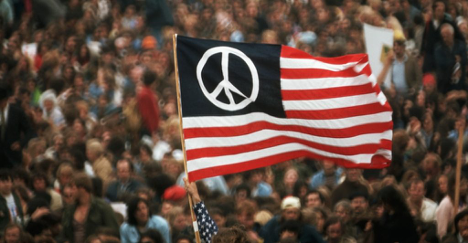 On January 3, 2020, so many people visited the Selective Service webpage that it crashed. The crash came hours after the announcement that Quasem Soleimani was killed by a U.S. airstrike ordered by President Donald Trump. In light of threats of a World War III and fear of a looming draft, the hashtag #WorldWarIII was one of the top trends on Twitter that day.

Operated under the United States government, the Selective Service System’s mission is “[t]o register men and maintain a system that, when authorized by the President and Congress, rapidly provides personnel in a fair and equitable manner while managing an alternative service program for conscientious objectors.” In January, the Selective Service webpage read in red, “THERE IS NO MILITARY DRAFT.” While the possibility of another world war frightens many U.S. citizens, beliefs about war prior to service are taken seriously in most instances. However, beliefs about war that are the result of military-linked experiences are more complex.

Ignoring the possibility of a draft, which does not appear to be coming, what happens when an individual freely signs a contract with the military and then changes their mind, claiming to be a conscientious objector? Current military policy has defined conscientious objection as “[o]pposition to participating in any form of war or the bearing of arms due to sincerely held morals, ethical or religious beliefs, or a combination of such beliefs.” There are two classes of conscientious objectors, 1-O and 1-A-O, which are both included in this definition.

The Army processes conscientious objection requests on a case-by-case basis, while proclaiming that new recruits sign a statement indicating that they are not a conscientious objector. Further, applicants to the Army who were previously conscientious objectors must sign an affidavit stating that they have abandoned those beliefs and are willing to bear arms. Similarly, the Marines require the person seeking conscientious objector status to bear the initial burden of presenting evidence demonstrating sincere opposition to war in any form based upon religious training and belief. This process depends largely on the military believing the applicant to be sincere after they have satisfied their evidentiary burden. However, the granting of this status is contingent on the Government’s inability to establish a rational basis in fact for denying the application.

Claiming conscientious objection after swearing an oath of service is difficult as the definition asks for the applicant to demonstrate opposition to participating an any form of war due to certain beliefs. If an individual is not opposed to all war, but is now opposed to the war they are participating in, that may lead to tensions with current policy. Essentially, service members are trapped within their contracts unless they can denounce war for a reason in which the Government will agree is in line with current policy.

It is not uncommon for service members to change their mind about their military contracts once deployed in war-zones. In fact, groups such as Vietnam Veterans Against The War and Iraq Veterans Against The War exist as outlets for those individuals. A recent Pew Research Center survey showed that about two-thirds of veterans said the war in Iraq was not worth fighting. Further, this survey showed that majorities of former troops said that the wars in Afghanistan and Syria were also not worth fighting. Barely one-third of veterans considered any of those conflicts worthwhile. Many veterans, while agreeing with President Trump, wish that he would rely more on military leaders in his decision-making.

The best chance an individual has in receiving conscientious objection status after serving is by proving that their beliefs about war changed after signing their contract. However, these beliefs still must fit in with the aforementioned policy. The harsh reality is that many of the service members who come to object to service do so in light of newfound political beliefs—they do not believe the U.S. should be in a certain country. This is not in alignment with the policy and leads to major difficulties for each individual with unique experiences. If an individual is unable to achieve conscientious objection or an honorable discharge after sometimes multiple deployments, they may go AWOL (Absent Without Leave), desert, or seek asylum in other countries. While oftentimes individuals who go AWOL appear to receive little to no punishment, individuals who speak out against the military have different experiences. One commonality between these decisions is that when an individual receives a less-than-honorable discharge, they are not entitled to government-sponsored veterans’ benefits. This adversely affects individuals with Post-Traumatic Stress Disorder (PTSD) as they are left to rationalize their experiences and seek help on their own, often feeling no support from the Government. While some active-duty service members seek psychological or psychiatric help for PTSD during service, data indicates that the military does not provide adequate resources for these individuals exposed to war-zones.

Tens of thousands of soldiers are looking for a way out right now but lack a movement that will welcome and support them. Winning a conscientious objection discharge is a long and cumbersome process. Service members’ views cannot be political and must come from a religious or deep place of conscience that was not present when joining the military. But rather than build a movement against war, the military may need to evaluate current policies in the best interest of service members. If an individual no longer feels they have the capacity to be within a war-zone, they should be moved to non-combatant roles per policy. However, the truth of the matter is that absent a clear mental health problem, which is hard to demonstrate, soldiers keep getting deployed with no say in the matter.

About the Author: Logan Kenney is a second-year student at Cornell Law School. After graduating from Nassau Community College in 2013 and Cornell University in 2015, Logan worked as a paralegal (at the Manhattan District Attorney’s Office and Del Mar College) and volunteered with the Navy-Marine Corps Relief Society. Her writing interests include psychology and the law, government, and veterans affairs.

Suggested Citation: Logan Kenney, Is There a Way Out of the U.S. Military if You Morally Object to Your Job?, Cornell J.L. & Pub. Pol’y, The Issue Spotter (Apr. 27, 2020), htpp://jlpp.org/blogzine/is-there-a-way-out-of-the-u-s-military-if-you-morally-object-to-your-job/.