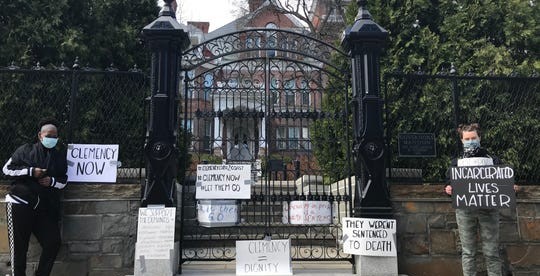 “The closest thing I can equate it with is…when you’re locked in a cell in a giant, old, deteriorating jailhouse, is the fear that there will be a fire and no one will come in and unlock your cell. What caught my attention about this virus is that it really feels like there’s a fire in this prison.” An inmate at Washington State describes the inevitability of COVID-19 and the powerlessness he feels at remaining incarcerated as the virus rapidly spreads. When prisoners routinely lack access to soap, and when hand sanitizer is considered contraband in prisons, it is easy to imagine the rapid proliferation of the infection. Lack of access to sanitation is only part of the conditions that make prisoners particularly vulnerable to COVID-19. Close quarters, frequently used communal spaces, and lack of adequate medical care are just a few other factors that make prisons and jails petri dishes for the spread of disease. Indeed, these factors have caused a huge spike in the number of COVID-19 cases over the past months. As the number of cases rise in the general United States population, the number of cases in prison skyrockets. Though New York City has been hardest-hit so far, its rates of infection pale in comparison to that of Rikers Island, whose infection rate is seven times higher than the city’s average. As the national number of cases has grown over the past months, prisons have begun to take measures to prevent the spread. These measures, ranging from lockdowns to limited releases of prisoners vary widely depending on the state and even vary based on the prison.

Long before the declaration of a global pandemic, concerns about the health of incarcerated populations have been prominent given that incarcerated populations are extremely vulnerable to many public health concerns. The same conditions that make COVID-19 such a huge threat, such as overcrowding, unsanitary environments, and lack of access to adequate health care, mean that prisons make contraction of infectious diseases more likely for incarcerated individuals and can lead to death. Further, there are many elderly people who are incarcerated who have chronic health conditions that require heavy amounts of treatment and care, something that the prison industrial complex is not well-equipped to handle. Since rates of infectious diseases generally hit prisons at high transmission rates, it is not surprising that COVID-19 is spreading so rapidly in detention and carceral settings. Public health has always been a concern in detention centers and the COVID-19 crisis just reinforces the need for more attention.

Since the enforcement of criminal law is typically left to the states, the states have individually been tackling the problem of how to respond to COVID-19 in their detention centers. Alongside this, the Federal Bureau of Prisons has its own protocol that applies across the federal prisons, meaning that some federal detention centers might be located in states where the state prisons have different protocols and responses.  While the reality of this is that many states are taking similar approaches, some states have been more proactive than others. Further, it should be noted that some of the states that have been more proactive are those that have been most dramatically hit statewide with COVID-19 cases and deaths.

There are a few types of interventions across many jurisdictions, albeit in different forms.

A main consideration in the responses to COVID-19 in prisons is that the general guidelines from the CDC are not easily transferable to a detention setting. For example, practicing social distancing, which generally suggests staying at least six feet apart from others, is nearly impossible in a cell where the beds are no more than three feet apart.

In fact, the CDC even noted these concerns and issued interim guidance specifically focused on how correctional and detention institutions should try and mitigate risk. Many of the recommendations from this guidance are similar to the guidance for non-incarcerated persons currently, but there are some noteworthy additions that try to get at some of the unique hurdles of detention centers. For example, one of the recommendations is providing soap and hand sanitizer for all incarcerated individuals at no cost to them. This guidance is certainly difficult to follow when many prisons consider hand sanitizer contraband given its alcohol base.

Due to COVID-19, forty-seven of the fifty states have either completely suspended in-court proceedings or heavily reduced the number of in-person proceedings. D.C. has also completely suspended in-person court operations. Courts have begun to use video platforms to conduct hearings, contradicting general court proceedings for some jurisdictions that ban cameras in the courtroom. This implicates a number of constitutional and procedural rights. For people who are detained pre-trial, the right to speedy trial, the ability to access counsel, and basic due process guarantees are all implicated. For those who are given an opportunity for bail, bail hearings might be cancelled, leading to longer periods of risk of COVID-19 exposure in a detention setting and longer periods of detention. Should people contract COVID-19 before getting bail, it is likely that they will expose lower-risk communities to the disease. Decreased court impact also implicates the right to a public trial. With courts shifting to conducting video hearings and teleconferences, public and press access has been limited. This means that individuals seeking to act as the public check on the judiciary are unable to participate at all or can only hear part of the proceeding. Denying access to proceedings to court watchers opens the potential that judges might set higher bail amounts or harsher conditions for pretrial release even if they are constrained by court orders.

Prisoners’ rights advocates argue that prisoners should be released during the pandemic because keeping people incarcerated violates their constitutional rights. One such right is the Eighth Amendment right to be free from cruel and unusual punishment. Advocates, such as the ACLU, argue that access to medical care is so poor in prisons that keeping people incarcerated is cruel and unusual.

Arguing that prison medical care violates the Eighth Amendment has long been, and continues to be, an uphill battle. The standard to prove that the state has violated a prisoner’s rights is extremely demanding. In Estelle v. Gamble, the Supreme Court said that deliberate indifference constitutes the “unnecessary and wanton infliction of pain” by the state (whether it is the prison doctors or prison guards) upon the incarcerated. The test for deliberate indifference is two-pronged. The first prong is objective, and asks: did the prisoner have a serious medical need? The second prong, which is much more difficult to meet, is subjective. The second prong asks for the state of mind of the officials responsible for the medical care. Under the Supreme Court case Farmer v. Brennan, the subjective standard requires that an official knows and disregards a substantial risk to an inmate’s safety. This is a challenging standard to meet because it is difficult to prove what a prison official was thinking when denying a prisoner adequate healthcare.

Eighth Amendment cruel and unusual punishment claims are even more difficult to succeed on because under the Prison Litigation Reform Act (PLRA), an incarcerated person must exhaust all administrative remedies before making a claim in a federal court. This is a tedious and time-consuming process. Critics of the PLRA argue that the law incentivizes prison officials to make the administrative process as opaque and difficult as possible. This means that more complaints from inmates will end in procedural default without making it to the courts for constitutional considerations.

Though there have been several cases in which inmates have argued that incarceration violates their Eighth Amendment rights during this pandemic, none have been successful thus far. It remains to be seen whether any courts will sympathize with prisoners’ arguments.

Incarcerated individuals have the continued legal right to access the courts and the right to counsel in doing so. This comes out of the First, Fifth, and Fourteenth Amendments which allow individuals the right to petition the government for a redress of grievances and the right to due process of law. Further, individuals have the right to the assistance of counsel arising out of the Sixth Amendment in at critical stages of criminal proceedings and in trials where you face actual imprisonment under Arsgersinger v. Hamlin. This right includes counsel’s assistance in the first appeal as of right, under the Supreme Court’s decision in Douglas v. California.

The right to counsel has been severely impacted by the current COVID related restrictions, with the main means of communication between lawyers and incarcerated clients being severely limited to only privileged legal mail. While many jurisdictions assured that increased ability to access clients through confidential legal calls would correspond with their shutting down or severely restricting legal visits, this has not been seen uniformly. Access to confidential legal calls has been severely impacted by the fact that many institutions have been decreasing the number of staff and counselors onsite who are able to facilitate legal calls. Further, some institutions have implemented video legal consultations and court proceedings, but there is no way to ensure that these are actually confidential in the ways that in-person visits at the institution would be. The public defense community has expressed their inability to do their jobs adequately given restrictions on accessing their clients because of lockdowns and restrictions in detention centers.

While there has not been significant legal action related to the right to counsel yet, this is an area that will be ripe for legal action soon.

As the COVID-19 pandemic evolves, so too does policy surrounding incarceration. This piece reflects the state of carceral policy at the time of publication. It also reflects only a small portion of the legal and policy ramifications of COVID-19 on incarcerated populations. Issues for further consideration include the disparate impact of the pandemic on incarcerated women and racial/ethnic minorities.

Despite the constant evolution in the pandemic, there are concrete actions that states and policymakers can take to mitigate the devastating impact of the virus on incarcerated people. The government must increase its data collection to determine where prisoners are most at-risk. This includes increasing access to testing. While some prisons have implemented mass testing, this is by no means a uniform policy. Additionally, these tests have revealed a massive spread of the disease, indicating need for more and uniform testing across facilities. Additionally, prisons must follow the guidelines and policies they have put in place. While many prisons have created policies to the benefit of prisoners, not all have actively implemented them. Lastly, prisons and the government must increase transparency in order to further public accountability regarding  beneficial policies for the health and safety of inmates.

Though the pandemic has had devastating impacts, particularly on incarcerated populations, it has also mobilized decarceration efforts. Those who wish to see changes in the system, both now, in response to COVID-19, and in the future, must continue these efforts.

Christina Lee is a rising third-year at Cornell Law School. Born and raised in Upstate New York, Christina attended Cornell University as an undergraduate and is enjoying her sixth year in Ithaca. Last summer, Christina worked at the Virginia Capital Representation Resource Center assisting inmates on death row with their federal appeals. She is a passionate advocate from prisoner’s rights.

Rosalind Major is a rising third-year at Cornell Law School. Before law school, Rosalind attended Davidson College, studying Gender and Sexuality Studies. Rosalind is passionate about capital and criminally long sentencing post-conviction work and trauma informed legal defense work. At Cornell, Rosalind has been involved in the Capital Punishment Clinic and the Women’s Decarceration Practicum. This summer, Rosalind will be interning at the Federal Community Defender Office for the Eastern District of Pennsylvania’s Capital Habeas Unit.