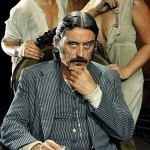 What do the TV series Deadwood, a voice changer, and tort doctrine have to do with each other? Bonhomme v. St. James.

Paula Bonhomme met Janna St. James on the “Deadwood Boards,” a website for fans of the TV series “Deadwood”. St. James had registered on the website as a man named “Jesse James,” and she used this male persona to begin an online relationship with Bonhomme. St. James took on a variety of identities online (such as “Jesse’s” ex-wife), and even spoke to Bonhomme on the phone using a voice-altering device to mask her female voice. Bonhomme sent St. James over $10,000 worth of gifts, purchased plane tickets Bonhomme ultimately never used, and made changes to her home in anticipation of “Jesse’s” visit. When Bonhomme discovered “Jesse” was not the man she had come to know online, she sued St. James for damages.

This holding has the potential to cause serious problems for Internet users. At least according to the Bonhomme court’s logic, many individuals may be liable for expenses incurred as a result of someone’s reliance upon their virtual representations. Mindless banter in chatrooms could now create legal liabilities. If courts apply a similar logic to negligent misrepresentation cases, even careless statements made on websites could give rise to litigation so long as plaintiffs can prove intent and harm. In theory, every user of the Internet is now subjected to an implied duty of truthfulness or due care in the representations they make when interacting with others online.

A few years ago, a comedy group made a website and YouTube account called “Infinite Solutions” that provided incorrect and outright ludicrous tech tips to viewers, such as wrapping your cell phone in Ethernet cables and tinfoil. The underlying joke seemed to be that some confused viewers may actually follow their tutorials. Post-Bonhomme, could a plaintiff sue the owner of “Infinite Solutions” for the cost of both the useless Ethernet cables and tinfoil if they were purchased in reliance upon Infinite Solutions’ tutorial? Could legitimate “how-to” websites with carelessly written content find themselves subject to suit?

There are very good reasons why the doctrine of fraudulent misrepresentation should be limited to commercial situations. The social world is full of misleading statements and “puffery,” and the Internet is certainly no exception. Making courts act as veritable internet truth-police could potentially delude Internet users into believing that online representations are trustworthy and into foregoing common sense online self-protection methods. Moreover, as noted above, requiring truth (or at least reasonable care) in online representations of fact could create an unreasonable burden on Internet users (and even would-be internet lovers) by subjecting them to litigation for innocuous behavior. Even where people like Bonhomme are taken advantage of, I think courts should refrain from bending doctrine to provide causes of action in this context—doing so threatens the very freedom that makes the Internet so attractive.