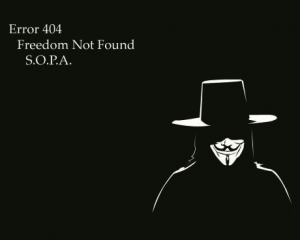 Sam Biddle of the tech-news site Gizmodo writes that the week of January 18 was “the week of copyright warfare, but the decision to nuke the king copyright violator so spectacularly only goes to show how little the feds need bigger bombs.”

The timing of Megaupload’s shutdown seems far from an accident, and in all likelihood it was a symbolic answer to the many online adversaries of SOPA and PIPA. The Justice Department charged Megaupload with getting rich off of copyrighted music and has records of all of it—evinced by its hefty 72-page indictment. The site’s founder, a rather infamous internet villain Kim Dotcom and other employees were arrested after police in New Zealand dramatically broke through electronic locks and into a mansion safe room. The fact that some of the site’s digital material was stored on a server in Virginia gave the DOJ the jurisdiction it needed to have Dotcom and other Megaupload employees arrested.

But in its rush to avenge the wildly successful SOPA protest on January 18, the DOJ may have shot itself in the foot. This is why: If the DOJ can completely shut down Megaupload all in a day’s work without SOPA and PIPA, why do they need Congress to take any action? Bear in mind, Megaupload was no small foe, nor was its prefix “mega” any sort of misnomer. The site was responsible for a whopping “4% of all traffic on the internet with 50 million daily visitors.”

As Giddle noted in his article, the DOJ is choking on irony: its “swift destruction of Megaupload sans SOPA proves how gratuitous the bill was in the first place.” Pushed through Congress by lobbyists from the Motion Picture Association of America (MPAA) and the Chamber of Commerce, the bills would ostensibly “broaden the DOJ’s justifications for seeking court orders, prevent advertisers from doing business with such sites, ban search engines from listing them, and force internet service providers (ISPs) to block the sites.”

Ben Popper of VentureBeat noted that the takedown of Megaupload actually highlights the efficacy of current anti-piracy laws. “By taking unilateral action against a rogue site who’s owners were scattered across the globe, the DOJ showed that it doesn’t need new legislation like SOPA or PIPA to handle piracy.” In fact, the DOJ relied on an already existent Act—the ProIP Act of 2008—to shut down Megaupload. Yet the site, which allegedly has cost Hollywood over $500 million in copyright violations, was itself cited as one of the key examples for why SOPA and PIPA required passage. If the DOJ was lawfully capable of swiftly taking down the behemoth website it terms the “Mega Conspiracy,” the DOJ has only succeeded in proving SOPA and PIPA were frivolous in the first place.