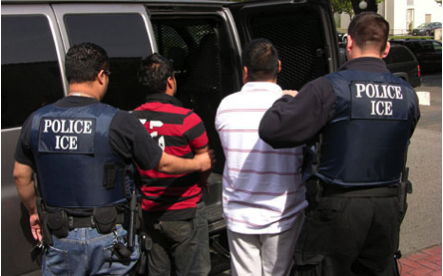 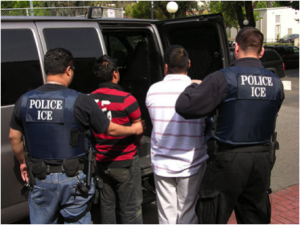 On March 26, 2007, at 4:30 in the morning, Erick Oliva-Ramos was dragged out of bed by Immigration and Customs Enforcement (“ICE”).  ICE is the federal law enforcement agency monitored by the Department of Homeland Security that is “responsible for identifying, investigating, and dismantling vulnerabilities regarding the nation’s border, economic, transportation, and infrastructure.”   That morning, ICE was looking for Oliva-Ramos’ sister—who they had a warrant for.  Although his sister was not home at the time, the ICE officers proceeded into Oliva-Ramos’ home and interrogated him and the other individuals in the house.  The ICE officers also demanded documentation from Oliva-Ramos to establish his immigration status.  The documents that Oliva-Ramos gave the ICE officers revealed that he was a Guatemalan citizen illegally in the United States.  After the raid, Oliva-Ramos was arrested, detained, and found deportable from the United States as a result of the evidence he was forced to give ICE.

During his removal hearing, Oliva-Ramos filed a suppression motion to exclude the documents obtained by the ICE agents documenting his illegal status on the grounds that the documents were secured through “violations of the Fourth Amendment that were both egregious and widespread.”  In making this argument, Oliva-Ramos’ goal was for the court to apply the exclusionary rule, which suppresses evidence obtained as a result of a Fourth Amendment violation.  The Fourth Amendment protects U.S. citizens and possibly undocumented non-citizens from unreasonable search and seizures.  Oliva-Ramos’ argument was derived from the dicta in the 1984 Supreme Court case INS v. Lopez-Mendoza.  In INS v. Lopez-Mendoza, the Supreme Court held that the exclusionary rule does not apply in removal proceedings, but the Court left open the possibility that it could apply if there was evidence of egregious and widespread Fourth Amendment violations.  The immigration court judge was unpersuaded by this argument and rejected Oliva-Ramos’ motion.  Oliva-Ramos’ appeal to the Board of Immigration Appeals (“BIA”) was also denied.  His petition to the Third Circuit, however, was more successful.  The court ruled that Oliva-Ramos’ argument was supported by the exception left open by the Supreme Court in INS v. Lopez- Mendoza and held that the exclusionary rule is applicable in removal proceedings when there is evidence of egregious and widespread Fourth Amendment violations.

With this ruling, the Third Circuit joined the First, Second, and Ninth Circuits in recognizing the applicability of the exclusionary rule to removal proceedings under certain exceptional circumstances.  The Third Circuit vacated the order of removal entered by the BIA in Oliva-Ramos’ case, giving Oliva-Ramos the chance to have his case reviewed under the new legal standard on remand to the BIA.