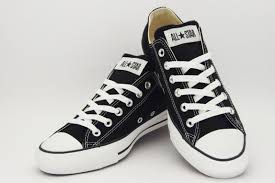 Converse is currently in the midst of litigation which seems to completely depend on the status of the aesthetic functionality doctrine. When consumers think of Converse, they often think of their Converse All Star sneakers (as seen below), also known as “Chuck Taylors.”

In October 2014, Converse filed suit against Wal-Mart (and dozens of other companies) claiming these companies were selling knock-off Chuck Taylors. For the sake of brevity, this post will mainly focus on Converse’s claims against Wal-Mart. Converse is claiming trade dress infringement on the grounds that Wal-Mart’s “Stinson Oxford” shoes are likely to cause consumer confusion.

Converse claims Wal-Mart is unlawfully reproducing its “midsole trademark” which consists of a particular design, including stripes, a toe cap, and a toe bumper. Indeed, in 2013, Converse registered this design with the Patent and Trademark Office.

In Two Pesos, the Supreme Court held that the Lanham Act protects trade dress, which includes the “shape, color or color combinations, texture, [and] graphics” of a product. Trade dress, in the form of a product design, can only be registered and protected, under the Lanham Act, if it acquires secondary meaning. Secondary meaning is acquired where “the primary significance of the [product design] in the minds of the consuming public” is its producer, not merely the product.

Section 32 of the Lanham Act prohibits any person from using a design which is confusingly similar to registered trade dress, for use in commerce without the registrant’s consent. One of the primary goals of trade dress protection is to prevent unscrupulous producers from selling “knock-off” products, thereby free-riding on the good reputation of another producer.

However, the Supreme Court has indicated that trade dress cannot be protected if it is aesthetically functional. In Qualitex, the Court noted that a feature is aesthetically functional if granting one producer the exclusive right to use it would put competitors at a significant, non-reputation based disadvantage. For example, the Qualitex Court commented that the plaintiff’s green-gold color on its dry cleaning pads did not significantly disadvantage competitors because there were many other colors available as alternatives.

There is not much question that “the primary significance of the [design] in the minds of the consuming public” is its producer, Converse. Converse has sold shoes with these features for over 80 years. Converse “sells more than 270,000 pairs of Chuck Taylors a day[,]” which totals “roughly 100 million pairs a year.” Converse’s complaint estimates that at least 60% of all Americans owned at least one pair of “Chucks” in their lifetime. When consumers see this design, they associate it with Converse.

Likewise, it is not difficult to conclude that Wal-Mart’s “Stinson Oxford” shoes cause consumer confusion. Generally, to determine the existence of consumer confusion, courts apply a multi-factored test (including similarity of the marks, evidence of actual confusion, and the defendant’s intent in selecting the trade dress)—but there is no need to jump through such legal hoops, here—just look at the shoes. On the Stinson Oxford’s page on Wal-Mart’s website, consumers state “[t]hey look like the real Converse sneakers,” “people can’t tell there not chucks,” and “[t]hese shoes look and feel just like Chuck Taylor’s.” Plus, potential consumers of Converse who pass by someone wearing Stinson Oxford shoes, particularly from a distance, seem quite likely to mistake Stinson Oxfords for Chuck Taylors (and thus become more or less likely to buy from Converse depending on how they perceive the quality of Wal-Mart’s shoe).

But wait—despite the existence of secondary meaning and consumer confusion, could Converse’s trade dress nonetheless lack protection on the grounds that it is aesthetically functional? A recent ruling by the Internal Trade Commission (also known as the ITC) suggests the answer is no. However, the ITC’s ruling is not the end of this litigation. That ruling “will now be reviewed by the full ITC; if upheld, Wal-Mart…can appeal to the Federal Circuit.”

Acknowledging the Flaws in the Aesthetic Functionality Doctrine

The purpose of this post is to advocate for the disposal of the aesthetic functionality doctrine. At first, this seems like a strange position to take–the Supreme Court has explicitly acknowledged the doctrine’s existence on multiple occasions. However, this post contends that, for three main reasons, public policy would be best served by disregarding the discussions of the Supreme Court and casting this doctrine aside.

Firstly, the doctrine punishes success. Producers make pleasing designs in order to gain revenue and reputation—but, “if a design is pleasing to the public, then it will not simply serve” non-reputation based advantages. Consumers prefer to purchase such a product because of its pleasing look, and (just as they had hoped) producers reap advantages from their appealing design. When courts strip these producers of trade dress protection because of non-reputation based advantages derived from a pleasing design, they simultaneously punish the ingenuity taken to develop such designs (and seemingly provide a perverse incentive to develop unappealing designs, because producers can be certain they will be protected).

Courts should notice that: (1) Converse’s shoes are unlikely to be protected by copyright law because “copyright protection for the designs of useful articles is extremely limited,” and generally does not apply to “works of industrial design,” and (2) even if they could acquire patent protection, this would not give Converse the protection they seek, as design patents only last for 14 years.

Third, for good reason, various Circuit Courts have applied this doctrine in confusing fashion. The 2nd Circuit, in a case involving Louboutin’s red-soled shoes, accepted the doctrine of aesthetic functionality—but called the doctrine counterintuitive, they asked “how can the purely aesthetic be deemed functional[,]” and decided the case on other grounds.

In short, the aesthetic functionality doctrine causes a protection gap. The fashion industry, in litigation like the Converse shoe case, often cannot rely on copyright or patent protection—so trade dress protection becomes Converse’s last line of defense. Converse’s “midsole trademark” intuitively feels like it should be protected: it is fairly unique, certainly unique enough to be well-known nationwide, and Converse spent hundreds of millions promoting this design. But—merely because many consumers think Converse developed such an appealing design–courts may rely on the aesthetic functionality doctrine to allow knock-off producers to copy the design without having to pay Converse a dime. The 2nd Circuit’s impression of this doctrine was right: it’s extremely counterintuitive.