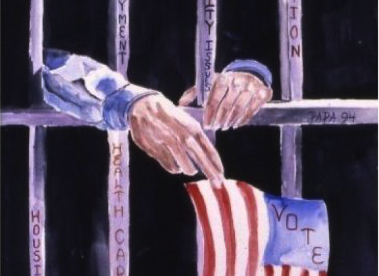 On April 18, 2018, the governor of New York, Andrew Cuomo, signed an executive order to restore voting rights to citizens of New York that are currently on parole. The order, along with other legislative reforms to the criminal justice system, has altered the way New York views voting. The United States, generally, is considered one of the strictest countries when it comes to felony voting disenfranchisement. New York’s recent actions as indicated by the governor’s executive order may start to change that perspective. With New York’s shift toward allowing for more voting rights for felons, some of the questions that arise include how will these proposed changes take shape? What are the prevailing trends among states? And what are the policy implications of states limiting disenfranchisement? To help answer these questions, some background is necessary.

Criminal voting disenfranchisement found its roots in American politics after the passing of the Fourteenth Amendment. Under Section Two, the text establishes a reduction in proportional voting for the states that bar individuals from voting unless they “participat[ed] in rebellion, or other crime.” By this language, Congress had given the states the ability to determine which criminal action would restrict an individual from voting (mainly felonious crimes). The first American State to institute felony disenfranchisement was Kentucky in 1792. However, the practice of criminal disenfranchisement existed long before the United States. In Ancient Greece, a practice known as civiliter mortuus (which translates to civil death) was used to subjugate those elites who violated Greek criminal codes. This custom of subjugation continued to medieval Europe and eventually made its way to the Americas after its etching within the U.S. Constitution.

The constitutionality of felony voting disenfranchisement has been a topic of concern at the federal level. One of the significant cases on the issue is Richardson v. Ramirez. Richardson v. Ramirez, 418 U.S. 24. In that case, three individuals were convicted of felonies and subsequently served their sentences and a successfully terminated parole. Id. at 31. The three ex-felons sued local California politicians for their respective counties’ voting laws that restricted their ability to vote because of their status, challenging the voting laws on equal protection grounds. Id. at 33.The Court found against them, with then-Justice Rehnquist delivering the majority opinion ruling that the California voting laws did not violate the equal protection clause. Id. at 55. Instead, the majority reasoned, it was up to state legislatures to make the determination if the laws were no longer necessary or deemed invalid. Id. As a constitutional matter though, the state felony disenfranchisement laws were held to be lawful.

It was not until eleven years later when the court revisited the issue of criminal disenfranchisement in Hunter v. Underwood. Hunter v. Underwood, 471 U.S. 222. In this case, the Alabama Constitution had been altered from previous language to include “any crimes … involving moral turpitude.” Id. at 223. Once again, then-Justice Rehnquist delivered the opinion of the court. On the face of the law, there seemed to be nothing facially abhorrent. Id. 227. However, using the disparate impact racially charged motivation from the Arlington Heightsstandard of review, there was a preponderance of evidence suggesting that the constitutional change was geared towards disenfranchising African American voters using a broad “catch-all.” Id. at 225. The court reconciled Richardson with Hunter by reaffirming that the court could not invalidate state criminal disenfranchisement laws unless the law was enacted with a racially discriminatory animus or motive. Id. at 233.

Jumping to the twenty-first century, we see a continued interest in further limiting state laws that cause disenfranchisement among felons. From a policy perspective, the laws are said to have significant impacts on limiting the voting rights of the political insular minority groups or impoverished individuals. Thus, these laws may be adversely affecting minority groups who tend towards being overrepresented in state prisons. Because of the high ratios of incarcerated individuals, the general effect of disenfranchisement laws is a disproportional voting restriction on minority voters including African Americans, Latino Americans, and Hispanic Americans. These same statistics generally hold among different states—including New York State—which holds an international presence on its incarceration rates and disproportionately high rates of racial minority imprisonment.

These stunning statistics do not just affect policy implications for racial subjugation but also proper rehabilitation of ex-felons into normal society. The reason behind rehabilitation is to cut down on recidivism. That is, ex-felons who are able to reenter society with certain stability in relationships and rights will feel like they belong. However, those who face disenfranchisement may suffer stigmatization or marginalization from others for their inability to vote or partake in the political atmosphere.

On the other side of the aisle lie aspects of perhaps why voting disenfranchisement for criminal lawbreakers has positive qualities. One such quality is the principle of deterrence, or that individuals will be dissuaded from performing criminal acts for fear of punishment. Jens David Ohlin, Criminal Law: Doctrine, Application, and Practice 21 (2016). A different justification for criminal disenfranchisement lies within the nature of the criminal activity itself. When a person commits a crime they perpetrate it against the victim, but also society as a whole. Thus, criminal disenfranchisement is a portrayal of society’s consequence on criminals for committing such acts.

An argument can also be made on the pro-disenfranchisement side concerning judgment. Not all individuals vote in elections. Non-citizens, children and early teenagers, and the mentally disabled are all barred from voting. It stems from a concern of judgment in the voting process and some on the pro-disenfranchisement side have pointed out that those who were convicted of felonies showed a lapse in common societal judgment and, therefore, are not trustworthy to cast a vote. This view varies among advocates as to whether subjugation is a permanent ban or a temporary suspension until the ex-felon shows renewed judgment. Lastly, it must be noted that other rights, along with voting, are generally restricted or curtailed from ex-felons on a state-to-state basis.

As the arguments are being ardently contested on both sides, the general trend is leaning in neither direction. Instead, the issue remains in a constant state of flux. State reforms are seemingly given and then taken away, usually accompanied with changes in political leadership or through judicial decisions from states’ highest courts. Across the fifty states, the landscapes vary in requirements and the severity of restrictions. The states fall on a spectrum of different limitations, from least severe––unrestricted (e.g., Maine and Vermont) to most severed––petitions required (e.g., Florida and Iowa).