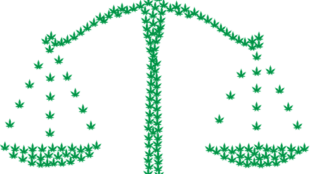 (Source) On Election Day, November 3, 2020, voters in four states, New Jersey, Arizona, Montana, and South Dakota approved the legalization of recreational marijuana in their states. These referendums, known as ballot initiatives, allow voters to participate in the state’s policymaking process by inviting them to vote on a proposed law. Prior to the 2020 election, nine states and D.C. legalized recreational marijuana through this method. Some ballot questions contained very general language concerning taxation and regulation. Now, eight years after the first successful legalization efforts in Washington and Colorado, the political conversation has evolved beyond rudimentary concerns.  This past year, criminal justice was on the ballot nationwide, allowing voters to impact state and local policies.  Now, there is a broader dialogue about legalizing recreational marijuana as a means of social and criminal justice reform. Many advocates of marijuana reform hope to wield this democratic tool to ensure that it would protect those who have been or would be harmed by marijuana’s criminalization. In light of the many historic moments of 2020 that have shed light on racial disparities and injustice in the United States, it is appropriate to address these key concerns in the ballot initiatives. In Arizona, the approved ballot measure included [read more]