Samra Kesinovic (left), 16, and Sabrina Selimovic (right), 15, are believed to be pregnant since marrying IS fighters shortly after arriving in Syria. The two girls ran away from their Vienna, Austria homes in April leaving their families a note stating: “Don’t look for us. We will serve Allah – and we will die for him.”Source: The Guardian. Photographs: Interpol.

In recent months thousands of young men and women have left Western countries to join the terrorist organization known as the Islamic State in their fight to establish a state governed by Sharia Law. This outpouring of young men and women willing to give their lives for IS, despite the group’s recent demonstrations of extremism and brutality, has frustrated a Western response.

Samra Kesinovic (left), 16, and Sabrina Selimovic (right), 15, are believed to be pregnant since marrying IS fighters shortly after arriving in Syria. The two girls ran away from their Vienna, Austria homes in April leaving their families a note stating: “Don’t look for us. We will serve Allah – and we will die for him.”Source: The Guardian. Photographs: Interpol.

European Union counter-terrorism officials have already sounded the alarm, announcing that a major terrorist attack in Europe is “inevitable” as IS fighters return home. In a recent statement, the Obama Administration confirmed that at least some of the Americans who left the country to fight alongside IS have since returned home.

The surge of young people leaving their homes has only increased since IS declared the formation of a Caliphate in late June, 2014. As the number of IS fighters grows, estimated to be between 20,000 and 31,500 by a CIA spokesman, the U.S. and other Western governments have struggled to answer the questions: “Why are these young people leaving?” and “What is the appropriate response if they wish to return home?”

Poverty, pressures of assimilation, and religious piety cannot fully explain the success of the IS recruitment campaign. IS has found ways to appeal to a variety of individuals, from the young criminal element in Belgium to British humanitarians. The most likely explanation for IS’s recruiting success is their ability to target young people who have trouble forging an identity at home.

IS has adeptly utilized a variety of recruiting methods to target young men and women. Most notable has been their use of social media. The group has employed well-scripted recruiting videos, photos of young men and women carrying AK-47s and grenades pledging allegiance to the IS flag, “selfies” of fighters holding the severed heads of their enemies, and promises of unconditional acceptance into the IS brother/sisterhood to lure foreign fighters away from their homes. Recruits from Western countries help strengthen these efforts by contributing to social media campaigns. 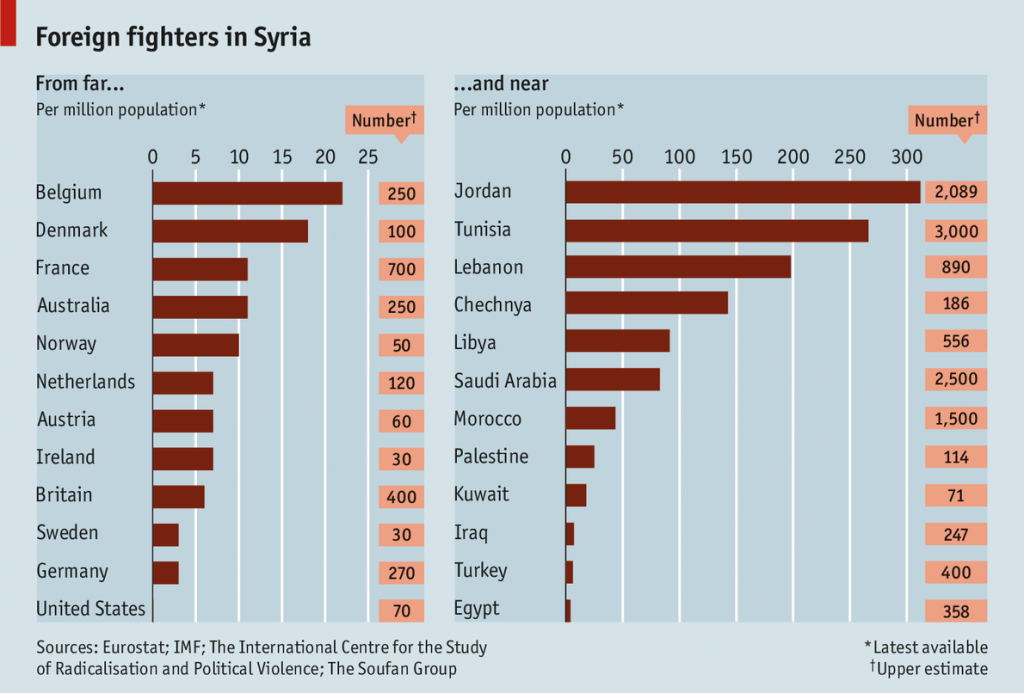 Chart detailing sources of IS foreign and local recruiting on a per capita basis. Source: The Economist. Click to read full article.

Beyond the brutal images of combat quickly seized on by Western media, IS has also used social media to create a “Disney-like” image of life in the Levant. Photos of food, restaurants, sunsets, and luxuries like free Red Bull and hotel stays for fighters have painted a positive picture of life in Syria for the potential recruits. Twitter hashtags – often linked to images of young people playing snooker, eating sweets, and splashing in swimming pools – have helped IS reach its desired audience and strengthen the impression that Syria is an attractive utopia for restless young people.

The facade has proven to be quite alluring. Nora el-Bathy, a 15-year old French schoolgirl with dreams of becoming a doctor, opened a second Facebook account which she used to communicate with jihadi recruiters prior to leaving for Syria. Zahra and Salma Halane, twin 16-year old sisters from the UK, left their home in the middle of the night without their parents’ knowledge to follow their brother to Syria. Samra Kesinovic, 16, and Sabina Selimovic, 15, left their homes in Austria after being radicalized at a local mosque run by a radical preacher. Shannon Conley, a 19-year old woman from the U.S., attempted to leave with plans to marry a 32-year old fighter she met online before being arrested on the runway at Denver airport. Hundreds – maybe even thousands – more are falling victim to IS’s marketing efforts each month.

Many foreign recruits have found that life in the Levant is much different than they were promised. The reality of the “war economy” characterized by smuggling, for-profit kidnappings, public executions, and fighting with other rebel groups has made many want to return home. Women in Syria and Iraq find themselves particularly at risk for rape, forced marriage and pregnancy, abuse, and slavery.

Disillusioned fighters who have gone to Syria to battle the Assad regime explicitly state “this is not what we came for,” after witnessing murders up close. Others have come to the conclusion that no matter how bad they thought life in the West was, it still remains better than what they are currently encountering. After being found “thin and sick” in Syria by her eldest brother, Fouad, Nora el-Bathy told him that she had “made the biggest mistake” of her life.

Unfortunately for the disillusioned and repentant, the path back home is blocked by both armed IS fanatics and the governments of their home countries. Those who wish to return home must risk death to escape their hosts turned captors before facing trial and likely imprisonment in their home countries. And this is how the West prefers it. After all, the wounds from the 9/11 terrorist attacks have yet to completely heal.

The West fears the return of radical IS sympathizers who intend to carry out attacks on domestic soil. Rightly so, just this summer a French “jihadist” opened fire and killed four at the Brussels Jewish Museum. In fact, U.S. Department of Homeland Security officials are most concerned with terror attacks carried out by a “lone wolf” sympathizing with IS.

But this fear may be encouraging IS recruitment in its own right. Fear of imprisonment and armed intervention by the West fuel the IS propaganda and recruitment machine. A new approach to the problem may be necessary.

Some analysts make a strong case for creating paths for foreign fighters who have become disillusioned to come home. Ex-extremists may be the most valuable asset the West has in combating the IS threat. They have proven to be the most effective in undermining the terrorist narrative and can best explain why going abroad to fight is a very bad idea. Further, this tactic has already been effectively used to stem gang recruitment in U.S. cities. 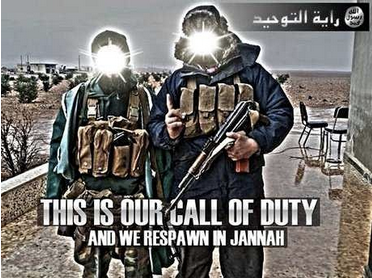 Other analysts propose combating IS’s narrative not with bombs, but with books. Extremist financiers have invested heavily in fundamentalist indoctrination by building religious and radical educational institutions in poor Muslim countries, attracting students with free meals and scholarships. The West can combat growing extremism in these countries by building alternative schools focused on empowering young people to pursue a more peaceful lifestyle. Providing education can also lead to economic improvements which have been shown to reduce civil unrest. Investments in education would even cost less than the $2.4-3.8 billion per year estimate of the current U.S. military campaign against IS.

These solutions should not be used to the exclusion of traditional domestic counter-terrorism efforts designed to prevent youth from leaving their home country in the first instance. It becomes more difficult to distinguish between a radical and repentant after they have joined IS in Syria. One way to mitigate this problem is to create a mandatory “de-radicalization” program returning fighters must complete before they are allowed to reintegrate into society.

Unfortunately, the success of these proposed solutions remains speculative in the long-run and unlikely in the short-term. However, IS and similar extremist terror groups will continue to plague the West until a solution is developed. The West’s response to IS must be well thought out and carefully executed – anything less will only drive increasing numbers of young people to IS.