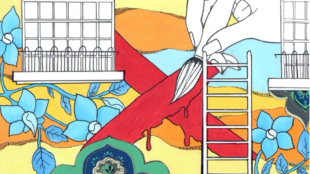 (Source) Unlike the drab billboards and miles of gray concrete known to punctuate urban landscapes, the splashes of color typical of murals and street art demand to be seen. Street art’s roots, however, are found in graffiti, a phenomenon where various structures are “tagged” with words, which has been viewed as a public nuisance and plays a symbolic role in the controversial broken windows theory of policing neighborhood blight and crime. Graffiti artists have gradually garnered a countercultural reputation for disrespecting private property rights since they see city structures as blank canvases. Los Angeles, for example, spends $7.5 million a year to eliminate graffiti, removing over thirty million square feet of it from over 600,000 spots in 2015. Authorship is typically accompanied by legal rights, but do ownership interests even exist for graffiti artists and can they enforce them?  Do they even want to? Cities generally criminalize graffiti as a form of vandalism, but whether an artist’s right to free expression can overcome this is less clear. Cities generally criminalize graffiti with various approaches: Los Angeles considers graffiti to be a nuisance, requiring owners to keep buildings free of graffiti while artists may face fines and imprisonment under the California [read more]