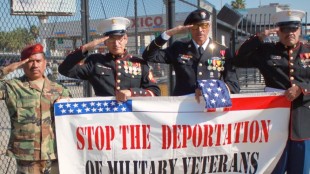 (Source) In November 2019, a group of non-citizen veterans of the United States Military (military) celebrated Veterans Day in Mexico. Many of these individuals enlisted in the military after President George W. Bush signed an executive order fast-tracking citizenship for individuals willing to serve. However, they never officially became citizens and continue to remain vulnerable to deportation. Now, they remain in exile within the Deported Veterans Support House—a safe haven for non-citizen veterans who have been deported. It is common for non-citizens to join the military with the expectation of receiving naturalization. In fact, since the Revolutionary War, legal permanent residents are eligible to enlist, with roughly 35,000 non-citizens serving active duty. Since October 2001, the U.S. Citizenship and Immigration Services (USCIS) has naturalized 129,587 members of the military. If an individual meets all of the requirements of either section 328 (One Year of Military Service During Peacetime) or section 329 (Military Service During Hostilities) of the Immigration and Nationality Act (INA), they are eligible for naturalization. By naturalizing through military service, individuals experience shorter residency requirements, no state-of-residence requirement, and waived application fees. Usually, if a non-citizen service member has received an honorable discharge, they are eligible for citizenship. [read more]