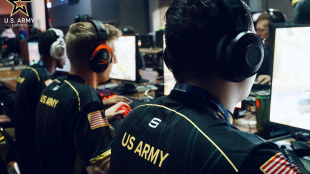 (Source)   Twitch.tv is a live-streaming platform that has exploded in popularity over the last several years. The platform, focusing primarily on broadcasting live video game content, attracts the curious eyes of over seventeen million visitors each day, and has been cementing itself as the de facto “king” of live video game streaming over the last half decade. In 2020 thus far, viewers have spent over 950 billion minutes watching content on Twitch. Of its immense viewing congregation, fourteen percent are between the ages of thirteen and seventeen, making Twitch a particularly valuable resource for those looking to market to Gen Z. Coincidentally, after missing recruitment goals in 2018, the Army turned to Twitch in advertising and recruiting efforts aimed at teens. As part of its Gen-Z-centered campaign, the Army has been leveraging esports to reach the substantial centennial population on Twitch. To their credit, this campaign has certainly borne fruit; the Army’s push to use esports in recruiting has generated over 13,000 recruiting leads so far this year. This success has caught the eye of several prominent U.S. military branches, including the Air Force and Navy, who have also begun to establish a presence on Twitch and in esports. [read more]