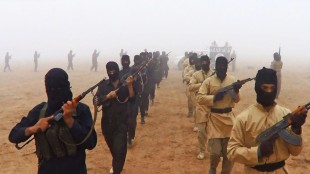 In his recent interview with Admiral Mike Mullen regarding the threat posed by the terrorist organization IS (Islamic State), Stephen Colbert momentarily discarded his hawkish conservative persona. “Can I tell you why the American people might be tired of [fighting in the Middle East]?…It is because we are asked to be afraid of it and reminded to be afraid of it but we no longer have much of a voice in it because our congressional representatives won’t vote on whether to do anything about it. We are not asked to sacrifice that much for it, very few of us go fight, and we also are not told all that much of what is happening over there. So all we have is the fear and none of the action. And so we eventually want to stop thinking about it…” The statement is a victory for truth over “truthiness.” Colbert pinpoints exactly why a war-weary America is preparing to drag itself back into an armed conflict after a decade long campaign that depleted our treasures and international credibility. Fear. But while we are willing to condone war at the altar of domestic security, Colbert reminds us that, without understanding the nature of [read more]

New York City police unions recently attempted to intervene to halt a settlement between plaintiffs and New York City in the stop-and-frisk cases.  Judge Analisa Torres denied the unions’ motions. Last summer, in Floyd v. City of New York, Judge Shira A. Scheindlin of New York’s Southern District held that the New York City Police Department’s practice of routinely targeting people of color and subjecting them to Terry frisks without reasonable suspicion violated the Fourth and Fourteenth Amendments of the United States Constitution.  A monitor was appointed to ensure that the NYPD complied with Judge Scheindlin’s remedial order, and the city appealed.   Various police unions made Rule 24 motions to intervene as defendants.  The Second Circuit remanded the case to Judge Torres.  Upon Mayor de Blasio’s inauguration, the city announced its willingness to settle. Though the city was ready to settle, the police unions still sought to intervene as defendants to prosecute the appeals.  Judge Torres denied the motions to intervene, noting that “the motions are untimely, the Unions have no significant protectable interests relating to the subject of the litigation that would warrant intervention, and even if their alleged interests were cognizable, the Unions lack standing to vindicate those [read more]
« 1 … 18 19 20