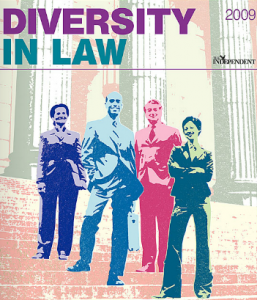 Law faculty are expected to publish their writing as an often-unwritten requirement of their profession.  Publication of a law review article adds value to the reputation of a legal scholar and influences hiring, promoting, and tenure of a law professor.  With the importance placed on publication, whether or not one is published becomes very significant.  Students sitting on law review acquisitions committees serve as gatekeepers for publication.  Because the advancement of a legal career depends to some degree on publication, it is imperative that all scholars have a “fair” chance at publication.  The problem is that diverse law journal associates are more likely to receive certain types of topics and viewpoints better than their “majority” counterparts.  Logic suggests that authors who wish to write from the viewpoint of the minority either assimilate by targeting primarily diverse journals, or go unpublished.  As a result, minority views are silenced and the future leaders of legal academia continue to lack diversity.

Because the law review is one of the first things students learn to respect upon entering law school, membership on the staff of the law review is crucial.  While writing competitions have been almost exactly the same for the past 100 years, the demographic of law students has changed.  The selection process is blind and deemed to be “fair.”  Reports show that this selection process has resulted in a remarkably low number of minorities on law reviews.  With an all-majority editorial selection committee, only certain “kinds” of people are making decisions on article selection, with far reaching effects for our legal community.  Without varied viewpoints to reach the blind spots of the “majority,” the minority voices are silenced.  The silenced minority legal scholars cannot advance like their colleagues, despite deserving the recognition and credibility that accompanies being published. This creates a racial disparity among law faculty because it is often the minority authors who choose to fill in these blind spots. The stifling of non-majority viewpoints not only cripples the advancement of non-majority legal scholars, but also denies them the opportunity to influence law reform through publication.

Whether law reviews acknowledge it or not, discrimination in our country has left a gaping hole in the diversity of our law reviews.  While statistical findings are still growing as more schools attempt to research the racial disparities on law reviews, one author in the Harvard Blackletter Journal found that 76% of law journals have no African-American members.

Although academic benefits are stripped from students of color by their non-admission to law reviews, the long term effects of this non-admission are of particular concern.  Unfortunately, unconscious discrimination is even more invidious.  If minority professors suffer from the bias toward “majority” authors through unconscious discrimination, it will further curtail their advancement.  For example, only 30% of the professoriate was female in 2010.

Many studies performed on unconscious discrimination involve modes of thinking that can influence law review editors’ selection of law review articles.  Our perceptions of writing styles and viewpoints and our interpretation and retention of information regarding certain delicate topics play on our implicit biases.  Cognitive biases can be unintentional and unconscious, but harmful nonetheless.