The Effect of Domestic Politics on Foreign Policy and the Legality of Senator Tom Cotton’s Letter to Iran.

On March 9th, 2015, Senator Tom Cotton (R-Ark.) penned an “open letter” – signed by 46 other Republican Senators – and sent it to the leaders of Iran to disrupt the Obama Administration’s negotiations on a nuclear deal. The letter sparked a political firestorm.

News agencies and political/policy/legal bloggers immediately began weighing in with their thoughts on the letter. Many commentators condemned Senator Cotton’s actions as treasonous or illegal. After doing some research of my own on the legality of the letter, I wasn’t convinced that the commentators had their analysis right.

To get some clarification on the issues, I sat down with Professor of Constitutional Law, and Speech or Debate Clause expert, Josh Chafetz. We left our politics at his office door’s edge and left no stone unturned during our conversation about Senator Cotton’s letter.

1. Let’s start with the basics, leaving out nuances and wrinkles, why is this letter a big deal?

Most importantly it is a big deal because American policy in the Middle East is a big deal. Iran is a major player on the world stage. The possibility of a nuclear armed Iran is worrying for all sorts of reasons. It plays into a much broader “politics in the middle east” that we all care about. So, it’s a big deal because of the underlying substance.

And then it’s a big deal because of the escalating conflict between the Republicans in Congress and the White House. It signals something of a stepping up in terms of a congressional desire to be confrontational. Most of the previous confrontations between congressional Republicans and the Obama White House had been limited to domestic matters, with the occasional brief foray into foreign affairs. This seems to be a more sustained attempt by Congress to engage in foreign affairs. The timing of this new foray was perhaps to be expected, given that Republicans now control the Senate as well as the House.

I think those are the two reasons why this letter is important. It is intrinsically an important matter, so it matters who is right about this. It also has domestic ramifications arising from the conflict between the President and Congress.

2. The Constitution, concerning executive powers at issue here, states in article 2: “[The President] shall have Power, by and with the Advice and Consent of the Senate, to make Treaties, provided two thirds of the Senators present concur.” Is the Senate simply expressing their “advice and consent” a little early here or have they exceeded their power, going beyond “advice and consent”?

I don’t think we need to think about this in those sorts of narrow terms. This isn’t my area of expertise, but as I understand it, what Obama is doing is negotiating a Sole Executive Agreement – not a treaty.

I think we should think about this in broader terms: Congress as a whole, and the Senate in particular, has an important role in our foreign affairs. It’s a role that is contemplated in various ways in our constitutional text; the Treaty Clause being just one of them. This letter is an example of a number of Senators playing part of that role. They’re not violating any specific prohibition in the Constitution. They are using the tools available to them to play a role in the conduct of foreign policy.

3. In posts on his blog (originally here, and then again here) concerning a visit Nancy Pelosi made to Syrian President Bashar al-Assad in 2007, Professor Michael Dorf addresses the Logan Act (18 U.S.C. 953), enacted in 1799, as a possible vehicle to prosecute government officials who attempt to undermine Executive Foreign Policy negotiations. In relevant part, the Act states:

Was this letter a violation of the Logan Act? Can you take us through the analysis?

That alone should suggest that they have not violated the Logan Act. But more importantly, I think the Speech or Debate Clause and the values underlying the Speech or Debate clause are central here. As I understand that Clause (which I wrote about in some detail in my book, Democracy’s Privileged Few), it protects, not just legislative activities that happen to take place within the physical confines of the Capitol, but rather all communication engaged in by members in their official capacities. That includes speech directed at their constituents, and, here, speech directed at foreign governments.

Now, the Supreme Court doesn’t always agree with me. There’s a case called Hutchinson v. Proxmire (443 U.S. 111) (1979) where the Court held that a Senator’s newsletter to his constituents was not covered by the Speech or Debate Clause. The Supreme Court may be inclined to think that this letter, too, would not be covered by the Clause.

I’m inclined to think that’s a ridiculous way to view the Speech or Debate Clause. It’s really important for members of Congress to be able to communicate, not just with each other, but with the broader world. That’s essential to their function. So if you view it the way I do, the Senators who wrote the letter would have Speech or Debate Clause immunity in any prosecution under the Logan Act.

4. Are there any defects with the Logan Act itself? Would this 1799 Act withstand a court challenge today? 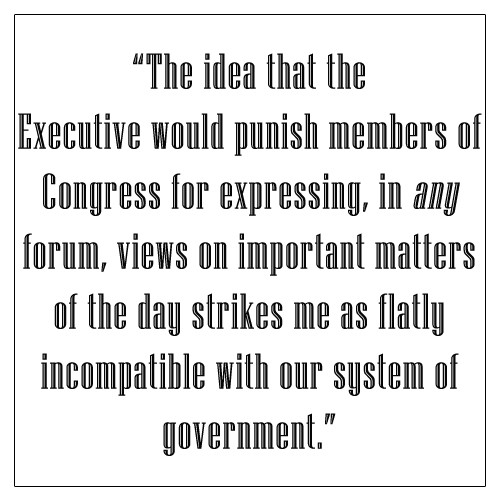 Even if the Speech or Debate Clause weren’t an obstacle, my understanding is that the Logan Act has almost never been applied against anyone, and has never been applied against members of Congress. And, even if one thought the Executive was constitutionally free to punish them for this letter, I think that would be outrageous. The idea that the Executive would punish members of Congress for expressing, in any forum, views on important matters of the day strikes me as flatly incompatible with our system of government.

I don’t really have a strong view on the constitutionality of the Logan Act as applied against, say, a private citizen. I’m not enough of a First Amendment expert to have a view there.

5. John Marshall, at the time a member of the House of Representatives and later a Chief Justice of the Supreme Court, said during a speech to the House of Representatives in 1800 that the President is “the sole organ of the nation in its external relations, and its sole representative with foreign nations.” This speech and proposition were later cited in United States v. Curtiss-Wright Export Corporation (299 U.S. 304)(1936) when Justice Sutherland wrote for the court stating:

“It is important to bear in mind that we are here dealing not alone with an authority vested in the President by an exertion of legislative power, but with such an authority plus the very delicate, plenary and exclusive power of the President as the sole organ of the federal government in the field of international relations–a power which does not require as a basis for its exercise an act of Congress, but which, of course, like every other governmental power, must be exercised in subordination to the applicable provisions of the Constitution.”

(Note: This citation would largely be considered dicta, or not binding law, by legal scholars because, at the time, the Supreme Court was addressing an issue factually separate from the one we are exploring today.)

How does the “sole organ” doctrine come into play here, if at all?

If one thinks this doctrine is correct, then it certainly comes into play. If the “sole organ” doctrine is correct, then it would suggest that the letter was inappropriate, and it may suggest that, under the Logan Act, the president alone has the “authority of the United States” and defines the “measures of the United States,” and therefore that the Senators could be prosecuted.

But, given what I’ve already said, it will come as no surprise that I don’t find the “sole organ” doctrine compelling, either descriptively or normatively. I don’t think the “sole organ” doctrine is an accurate description of reality, or was at the time Marshall said it (and that’s leaving aside the live question of whether, in context, Marshall was making nearly as stark a claim as subsequent uses of that passage have suggested). Congress (and, for that matter, the courts) have always been involved in the construction and articulation of American foreign-policy, national-security, and diplomatic interests. It just has never been the case that the President unilaterally handles foreign policy. That’s always been a shared power. And, in my view, it’s a good thing, too. I wouldn’t want our national interests in an area as important as foreign relations (or even the narrower field of diplomatic relations) to be defined solely by one actor.

No. Again, descriptively, this can never be the case. Countries are always internally divided, even autocratic countries, and that inevitably spills over into how they conduct their foreign affairs. Even if these Senators hadn’t sent a letter to Iran, but had published an op-ed in the Wall Street Journal attacking the Iran negotiations, do we really think that op-ed wouldn’t have been noticed by Tehran? Of course it would have. And, again, I think that’s a good thing: Senators are and ought to be engaged in the construction of the interests of the United States, and things like this letter are one way of doing so.

The “united front” concept was somewhat descriptively accurate for a couple decades after World War II, in the 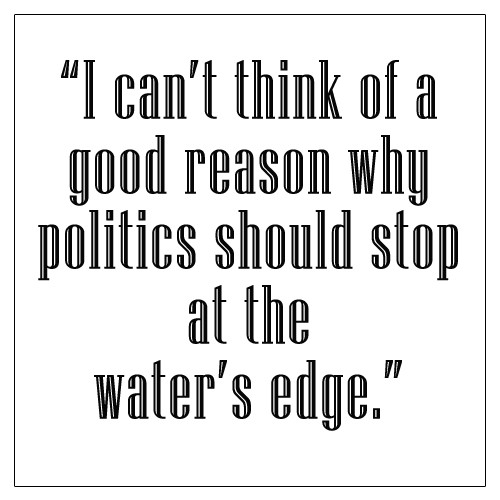 period of what has come to be called the Cold War Consensus. The Republican and Democratic establishments more or less agreed on the aims to be pursued in the Cold War. So the foreign policy differences between Eisenhower and Kennedy were slim, at best. But that fell apart in Vietnam under the Johnson administration, where a significant wing of the Democratic Party came to oppose the war.

There’s no reason, in my view, to think that a “united front” is a good idea normatively. If we are internally divided about our foreign policy, we should express that. It seems weird to me to say “Nope, once the President sends troops into wherever we have to line up behind him and support that.” It likewise seems odd to say, “Well, whatever concessions or agreements the President wants to come to in the course of diplomatic negotiations are ipso facto American national interests and therefore must be supported and promoted by all other official actors.” That’s preposterous. I can’t think of a good reason why politics should stop at the water’s edge.

7. Should we, as a matter of policy, want Congress to take a more active role in determining how the Executive handles foreign policy?

As a starting matter, we should recognize the role Congress already plays in foreign policy. Congress confirms not only Ambassadors, but the entire political rank of the State Department. There is the fact that treaties require Senate ratification. If agreements with foreign governments are done as Congressional-Executive Agreements they require majorities in both houses. And, there’s a limit to what you can do with Sole Executive Agreements.

Then there are other ways Congress can affect foreign policy. For instance, one thing the President can do unilaterally is move American troops around the globe. Except he can’t move troops he doesn’t have. Congress’s decision about how to fund the armed forces affects our global posture completely. If we didn’t have any aircraft carriers, we couldn’t project American power the way we do. So the fact that Congress has chosen to fund and maintain aircraft carriers completely structures, not just our military, but our diplomatic relationships. There are all these ways decisions Congress makes are constantly affecting our foreign affairs and our diplomatic activities.

Should they take a bigger role? I think sometimes yes, it would be helpful. I think they often take a fairly large role. Here, I think they’re substantively wrong. But I wouldn’t object on principle for Congress to take a more active role in determining Foreign Policy.