This summer, the California Department of Public Health (CDPH) reported that the state was suffering from a pertussis (whooping cough) epidemic. “Whooping cough” is a highly contagious and potentially fatal. respiratory infection. The CDPH recorded over 8,000 cases this year, and on 288 of those cases the patient was hospitalized. This epidemic, along with epidemics in 2010 and 2005, marks a dramatic increase in the incidence of pertussis since the 1950’s. 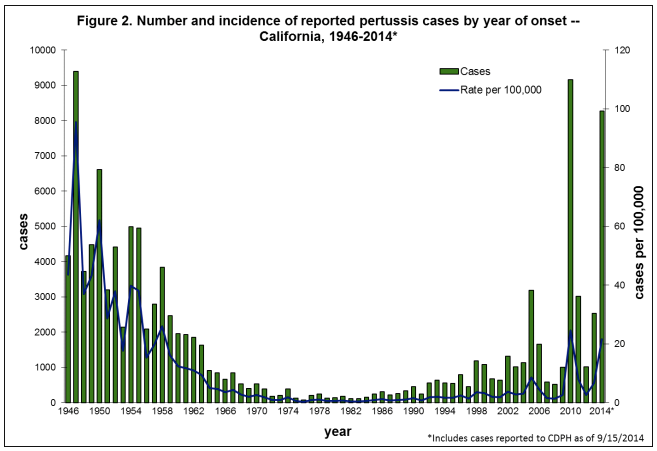 Public health officials suspect the increased prevalence of the disease correlates with an increase in the number of parents who refused to vaccinate their children. Every state in the country has a law that required children admitted to public schools to provide documented proof that they have met all of the state’s vaccination requirements, however, exemptions are provided for religious, medical or other valid reasons. Parents, particularly wealthier parents of children in California private schools, are increasingly more likely to apply for these personal belief exemptions to the state’s mandatory vaccination laws. The allowance of such exemptions highlights governmental tension over respecting individual choice and prioritizing public safety.

The United States Supreme Court has consistently recognized that states have the authority to enact laws to promote public health pursuant to its general police powers. States have historically invoked these powers to institute measures like quarantines and enact mandatory vaccinations laws.

In Jacobson v. Massachusetts (1905), the Court affirmed the authority of the Massachusetts Board of Health to require its citizens to obtain the smallpox vaccine. In Zucht v. King (1922), the Court upheld a city ordinance promulgated by San Antonia, Texas that prohibited children from attending city schools if the child failed to present a certificate of vaccination. The Court noted in that case “the broad discretion required for the protection of public health.”

The Court has also found authority to compel vaccinations under the doctrine of Parens patriae– setting forth the power of the state to intervene against irresponsible and abusive parents and guardians. In Prince v. Massachusetts (1944), the Court held that parental authority over children can be restricted when doing so protects the health and well being of the child: “The right to practice religion freely does not include liberty to expose the community or the child to communicable disease or the latter to ill health or death.”

There are, however, limits to the state authority in this respect. In Jacobson, the Court set forth a reasonableness tests for public health measures:

[I]t might be that an acknowledged power of a local community to protect itself against an epidemic threatening the safety of all, might be exercises in particular circumstances and in reference to particular persons in such an arbitrary, unreasonable manner, or might go so far beyond what was reasonably required for the safety of the public, as to authorize or compel the courts to interfere for the protection of such persons.

The above statement sets an early precedent for courts to investigate the scope of such laws and carve out a space to protect individual choice. The qualification, however, poses a problem for infections diseases where the exemption of an individual might threaten the safety of the community. Even so, every state allows for individuals to invoke certain exemptions to mandatory vaccination laws.

All fifty states provide exemptions for children for medical reasons, such as where the child’s immune state is impaired by a congenital condition, or where the child has a serious allergic reaction to a vaccine. Forty eight states provide for exemptions where the individual has a religious objection, though standards for valid objections vary from state to state. For example, Iowa requires parents to attest that “immunization conflicts with a genuine and sincere religious belief and that belief is in fact religious, and not based merely on philosophical, scientific, moral, personal, or medical opposition to immunizations.” Other states only require parents to state that they have a religious objection to vaccination. allow philosophic or personal belief exemptions. In most cases, states only require parents to affirm the existence of a personal objection to vaccination to qualify for the exemption.

The Herd and the Sheep

As a society, we constantly make choices about common rules to which everyone must adhere, regardless of individual situation. Our courts do not recognize individual exemptions to traffic laws or taxes because such protections are rendered meaningless when individuals are not held accountable. Kristen A. Feemster, a physician and researcher at the University of Pennsylvania School of Medicine, explains why vaccination mandates must be similarly applied:

Vaccines work by protecting individuals, but their strength really lies in the ability to protect one’s neighbors. When there are not enough people within a community who are immunized, we are all at risk. Personal and religious belief exemptions should be curtailed because some people, whether because of age or a compromised immune system, cannot receive vaccines. They depend on those around them to be protected.

This concept is generally referred to as herd immunity. Herd immunity occurs when a sufficiently large portion of a community is vaccinated. Most members of that community, even those who have not received the vaccine, are protected because there is little room for the disease to spread. Those who have been vaccinated serve as a protective barrier against the likelihood of transmission of the disease, thereby protecting those who are not vaccinated or those who received the vaccine but are not protected.

The top diagram below illustrates that disease spreads easily and outbreak occurs in a community in which no one is immunized. In the middle figure, some of the population is immunized, but the immunization rate has not reached the critical threshold necessary for herd immunity and disease spreads through the community. In the bottom diagram, a sufficiently large portion of the population is immunized, protecting most members of the community. 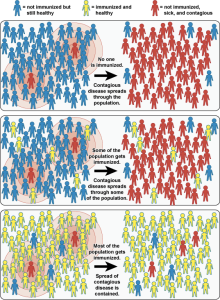 Illustration of how immunization works.

Where an individual is claiming a medical exemption, there imminent health need must be prioritized over a hypothetical outbreak. Many parents, however, have raised the same argument regarding the safety of vaccinations generally. In other words, these parents want to exempt their children because they believe vaccination itself is unsafe. The legitimacy of that claim bears on the legitimacy of the exemption.

Benefits and Risks of Vaccination to the Individual

. Vaccines have been proven to decrease dramatically the frequency of disease. The table below compares annual morbidities in the United States for the three years immediately preceding the release of a vaccine with modern annual morbidities, demonstrating strong correlation between vaccination and decreased incidence of disease. 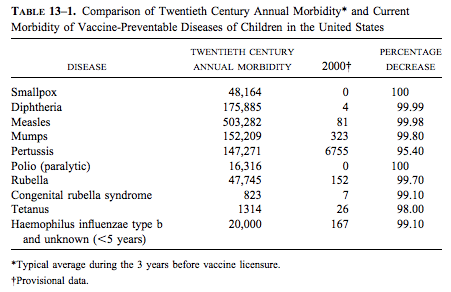 However, no vaccine is perfectly safe and effective. The U.S. Department of Health and Human services estimates that most childhood vaccines produce immunity in about 90-100% of vaccine recipients. And, like any medication, vaccines can have side effects. These side effects are generally mild, such as temporary redness at the injection site. In an effort to promote childhood vaccinations, the Mayo Clinic has published responses to frequently asked questions by parents, assuring them that vaccines do not cause diseases like autism and that vaccine side effects are mild.

Indeed, Former Surgeon General Jocelyn Elders so strongly believes in vaccinations that she recently called for the personal belief exemption to be abolished:

When you choose not to have your child immunized you’re cheating other kids. Their vaccinations protect your child. Not getting a child immunized is child abuse, even if you are not using a strap. The only exemption from immunization should be for religious reasons. If you feel that strongly that immunization is not a good idea, then don’t send your kids to school. Don’t make other children, or your child, suffer.

Others believe parents should have a choice. Jennifer Margulies, author of “The Business of Baby” acknowledges the benefits of vaccination but argues that public health officials do not have the right to force parents to vaccinate their children. According to Margulies, parents who resist vaccination may still be competently protecting their children’s health:

It is a news media-driven misperception that parents who claim philosophical or religious exemptions are uneducated and misinformed…in America we believe parents are capable of making their own decisions about their children’s health. We believe in freedom of choice. This freedom of choice extends to when- and even whether- parents vaccinate their kids.

As the debate continues, new health crises are emerging across the globe. To meet those challenges, we will have to decide as a country whether to prioritize choice or security in the public health context.