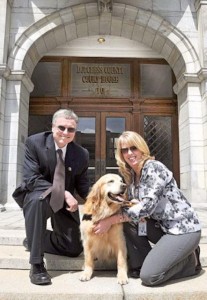 In Part I of this two-part series, I introduced the facts of People v. Tohom and the legal arguments in support of courthouse therapy dog programs.  Criminal defense attorneys, however, often object to the use of a therapy dog in the courtroom because of the potential prejudicial effect caused by using the dog and the resultant increased sympathy for the testifying victim.  Under this theory, the defense will usually argue that because the dog is so appealing, the witness becomes “more likable or vulnerable” in the eyes of the jury.

To combat this prejudicial effect, Courthouse Dogs, LLC provides a sample balancing test, based on a balancing test used in an analogous adult support person case, that could prove effective in preventing abuse.  The proposed balancing test factors include: (1) requiring a showing that there is a substantial need for the use of the dog; (2) considering potential alternatives before granting the use of the dog; (3) ensuring that the dog is only used to the extent necessary to accomplish the requisite purpose; and (4) instructing the jury about the dog appropriately.

In People v. Tohom, the trial judge concluded that the use of Rosie during the victim’s testimony was permissible, if not compelled, by “the nature of the charges in the accusatory instruments, the victim ‘qualifying’ as a child victim under Executive Law §642-a, the expert’s opinion regarding the very severe emotional and psychological stress that the victim [would] undergo while testifying and [the trial judge’s] observations.”  Additionally, the court noted that it believed “[w]ith an appropriately fashioned instruction to the jury, any possible prejudice [to the defendant would] be minimized, if not eliminated.”  In so doing, the court very closely corresponded to the proposed limiting factors.  The court obviously fulfilled the first proposed factor requiring a showing that there is a substantial need for the use of the dog by considering the nature of the charges, the mandate in Executive Law §642-a, and the victim’s severe emotional and psychological stress.  The court also obviously fulfilled the fourth proposed factor requiring appropriate jury instructions.

However, the court also stated that “[i]t is unknown whether the child can testify without the dog.  Certainly, she is better able to testify with the dog present and her art therapy clearly demonstrates her fear of the perpetrator.”  Therefore, while it is possible the court considered the second (i.e., considering potential alternatives before granting the use of the dog) and third (i.e., ensuring that the dog is only used to the extent required to accomplish the requisite purpose) factors in its decision making process, it is more likely that the court instead based its decision solely on its consideration of the first and fourth factors.

Even so, balancing tests are not mandates, and a decision can still be considered reasonable without satisfying every factor in a balancing test.  Considering the trial court’s careful consideration of the victim’s ability to testify without the dog and the potential prejudicial ramifications of allowing Rosie to assist the victim in testifying, it seems clear that the trial court, at the very least, acted reasonably in allowing Rosie to serve as a courthouse therapy dog.  Therefore, barring another legal or factual finding by the appellate court that would necessitate overturning the trial court verdict, the proper outcome of the pending People v. Tohom appeal will be to uphold the defendant’s conviction and allow courthouse therapy dogs continue to help victim’s testify in New York State courts.