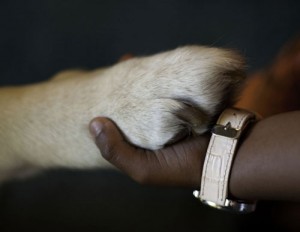 In courthouses across the United States, dogs are taking the stand—not to testify, but to serve as emotional support for testifying victims and witnesses.  Courthouse therapy dogs are professionally trained dogs that provide emotional support to people involved in the criminal justice system.  Rosie, one such courthouse therapy dog, rose to national prominence in 2011 when the New York Times ran an article detailing her role in People v. Tohom, a criminal sexual assault case and also the first New York State case to utilize a courthouse therapy dog to help a victim testify.  The victim who utilized Rosie’s services as a therapy dog in this case was a 15-year-old girl; the defendant, the victim’s father, was accused of raping and impregnating his own daughter.  The victim’s therapist believed that the victim, who had been diagnosed with PTSD, would likely suffer “very severe emotional and mental stress” while testifying in court about the trauma of her experience.  With Rosie’s help, however, the victim was able to testify and her father was convicted and sentenced to prison for 25 years to life. The case is currently up for appeal in the New York State court system, and, with an onslaught of recent media attention, it has become part of the national debate about whether and to what (if any) extent service dogs should be used by courthouses.

Established by former King County Senior Deputy Prosecutor and courthouse therapy dog pioneer Ellen O’Neill-Stephens, Courthouse Dogs, LLC identifies significant legal support for the use of therapy dogs to assist crime victims and others in the courtroom, including both statutes and case law.  Federal Evidence Rule 611, for example, tasks trial judges to “exercise reasonable control over the mode and order of interrogating witnesses and presenting evidence” so as to “make the interrogation and presentation effective for the ascertainment of the truth,” to “avoid needless consumption of time,” and to “protect witnesses from harassment or undue embarrassment.”  Marianne Dellinger argues that this Rule supports the use of courthouse therapy dogs because “the truth of testimony may be construed more easily from a relatively composed witness rather than from a distraught one” and “the use of dogs to emotionally support witnesses may preclude time-consuming breaks otherwise needed to let upset witnesses recompose themselves.”

Because courthouse therapy dogs serve an analogous function to teddy bears and other comfort items, they could be permitted under a similar analysis.  But not everyone thinks courthouse therapy dogs should be allowed.  In Part II of the two-part series, I will explore these counter-arguments and analyze whether the trial court’s decision in People v. Tohom to allow Rosie to accompany the victim to the witness stand was appropriate.