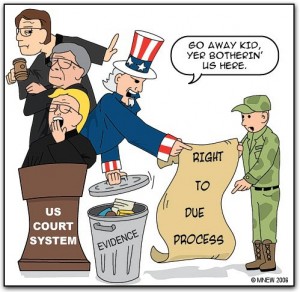 In Parts I, II, and III of this series, I introduced the problem of faulty eyewitness identification, presented the factors currently considered by jurors when weighing eyewitness testimony, discussed the problems surrounding eyewitness confidence as it relates to accuracy, and considered other variables that can influence eyewitness accuracy.  In Part IV, I discuss whether the problems mentioned in my previous posts are substantial enough to render the current Biggers factors a violation of due process.

As I have indicated in my previous posts, eyewitness testimony can be quite unreliable, and there are a number of factors that can impair eyewitness accuracy.  Nevertheless, once a witness identifies an individual as the perpetrator, the now-defendant is at the mercy of the jurors (who are still instructed to weigh the eyewitness’ testimony based on the potentially outdated Biggers factors).  In a judicial system so concerned with protecting individuals from wrongful convictions, the use of such outdated factors hardly seems “fair.”  In fact, I contend that not only is it unfair, but it violates the due process rights of the defendant.

Courts use a Fourteenth Amendment procedural due process analysis when considering the admissibility of eyewitness testimony.  As a refresher, the Due Process Clause of the Fourteenth Amendment prohibits state and local governments from depriving people of life, liberty, or property without certain steps being taken to ensure fairness.  Courts certainly take some steps to ensure fairness with regard to eyewitness identifications.  For example, if a court determines that identification was made as the result of an overly suggestive police lineup procedure, the court will determine whether the suggestive procedure led to a substantial likelihood that the suspect was erroneously identified as the perpetrator.  A court will only find such an “irreparable misidentification,” however, when the identification is found to be “unreliable.”  Such a standard begs the question: how does a court determine that a misidentification was unreliable?  After all, the court will likely weigh the reliability of the identification using the Biggers factors, which in no way account for suggestive police lineup procedures.  It is easy to imagine a scenario in which a suggestive lineup procedure can be used, and the court, upon analyzing whether or not the identification was reliable, asks:

Was the witness confident?  Check.

Was the witness paying attention when the crime was committed?  Check.

Given the amount of empirical research indicating that the Biggers factors are in no way the best method to evaluate the accuracy of eyewitnesses, the safeguard of such judicial review hardly seems adequate to ensure fairness.

So what can be done to provide a better safeguard of a defendant’s due process rights?  In a comment on an earlier post in this series, an individual suggested that perhaps skillful cross-examination of the eyewitness could shed light on the relative inaccuracy of the witness’ testimony (while correctly noting that this would still not amount to a complete counter-balance to unreliable eyewitness testimony).  This argument undoubtedly has merit.  It is easy to imagine a witness who claims to have gotten a good look at the perpetrator and is quite confident in his or her identification.  It is equally easy to imagine a suave attorney on cross-examination saying:

Attorney: You say you got a good look at the perpetrator.  Say, did this event take place outdoors?

Witness: Yes, it was outdoors.

Attorney: I see.  And what was the weather like that day?

Witness: Well, it was foggy.

I could go on and on with several questions, but you get the point.  One problem with eyewitnesses, though, is that in many cases they are particularly reluctant to change their minds about their confidence or accuracy once they have made an identification and have possibly received feedback on that identification.  In fact, social scientists have even discovered the consistent presence of a “relation back” effect in eyewitnesses.  This effect refers to the tendency of an eyewitness who has made an identification to consistently stick with that choice in subsequent lineups and hearings, even if the identification was erroneous.  Also, from a strictly common sense approach, it is easy to see why some eyewitnesses may be reluctant to admit that they are not as sure of themselves as they previously stated.  After all, these eyewitnesses have already identified the defendant, presumably in multiple lineups that had taken place several months before, and have played a major part in the defendant being charged and put on trial.  It does not seem like it would be very easy for a witness to then simply say, “sorry, maybe I was wrong; I don’t think that’s the guy.”  Additionally, as I have discussed in previous posts, eyewitnesses are often overconfident.  A cross-examination may just open the door for the witness to reassure the jury that they are positive of what they saw.

Perhaps the most common way defense attorneys seek to protect their clients from erroneous eyewitnesses and the outdated Biggers factors is through the use of expert witnesses.  Psychologists are often called to serve as expert witnesses in trials that feature eyewitness identification.  These experts are then called on to discuss the fallacies inherent in eyewitness testimony. The use of expert testimony has emerged as a decent way to limit wrongful convictions based on a faulty identification, though its use is hotly contested, and empirical research has shown that expert testimony can improve jury decision-making by helping jurors to consider the proper factors when weighing eyewitness testimony.  But the continued use of such testimony can lead to confusion for jurors.  Imagine if you were a juror, and an expert spent two hours explaining to you why the Biggers factors are no good and why you should consider other factors instead.  Then, minutes later, the judge lays out the Biggers factors and tells you that the Supreme Court of the United States says that these are the factors you should consider when making your decision.  A little torn about what to consider?  Me too.

So what’s left?  None of these safeguards seem to provide the necessary protection to satisfy due process requirements.  In fact, the sheer number of cases where individuals are falsely imprisoned is enough to indicate that these safeguards are simply not good enough.  The only solution is to revamp the Biggers factors in light of current empirical research to improve the accuracy of eyewitness identification.

In the conclusion to this series, I will discuss what some states are doing to update the Biggers factors, I will give you one expert’s take on the situation, and I will set out a proposed set of factors that should be adopted by the Supreme Court in place of the problematic Biggers factors.