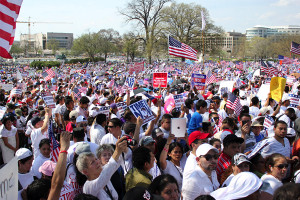 First, we discussed the potential timing of the passage of comprehensive immigration reform.  Although people have been lobbying for changes in immigration law for a while, they need to be patient because they will still have to wait some more time before Congress passes anything.  Professor Yale-Loehr predicts that the new legislation will pass in 2014 or 2016.  He noted that elections tend to prompt Congressional action on major issues like immigration.  For example, the last comprehensive immigration reform passed during the election year of 1996.

Even though immigration advocates hope for passage sooner and are frustrated with Congress’ inaction, it’s not a bad sign that nothing has passed yet.  Professor Yale-Loehr explained that immigration remains controversial and it takes time even for Congress to enact legislation concerning non-controversial issues.  Additionally, the recent federal government shutdown shows just how dysfunctional Congress is right now in dealing with national problems.  Therefore, immigration reform supporters should keep advocating for change and should continue to pressure Congress to enact comprehensive immigration reform.  So exactly what should the legislation include?

For comprehensive immigration reform to successfully repair the nation’s problems concerning immigration policies, the new laws must be effective.  Professor Yale-Loehr endorses a “three legs of a stool” approach.  First, he says there must be a path of legalization to deal with the over 11 million undocumented individuals living in the United States.  Second, there must be effective control of the border.  With effective control of the border, people will enter the United States legally instead of illegally reducing the number of undocumented individuals.  Although Professor Yale-Loehr acknowledges that people will debate the “right” type of border control (such as how much money to spend and exactly how to secure the border), he believes that this prong remains important in implementing effective immigration reform.  Third, the new immigration system must create the right immigrant categories so that future immigrants will successfully adapt to the American society. More specifically, Professor Yale-Loehr suggests that to attract the “best and the brightest” immigrants, the United States should offer more employment-based green cards instead of family-based ones. (Currently 70-80% of the individuals who immigrate to the United States arrive based on their family characteristics).

Professor Yale-Loehr believes that an immigration system like the one recently adopted in the UK should be considered, but he realizes that such a system cannot exist in the United States due to the country’s politics.  He explained that the UK immigration system would deviate too much from the current U.S. immigration policies.  Consequently, Congress would not have the ability to implement such drastic changes.  The immigration system in the UK incorporates a point system where agencies weigh various attributes of an individual (including, but not limited to education, skills, knowledge of national culture, and prior work experience) when determining who should be allowed to immigrate.  Unfortunately, despite the politics hindering the ability to create such a system, the United States also does not have the money or the talent to implement a point-based immigration system.  For example, the current national immigration services are already backlogged with cases.  Maybe, in the future, if the United States acquires more funding for immigration departments, the United States can adopt a point system.   However, for now, hopefully Congress will at least include in its legislation the three important areas explored above.