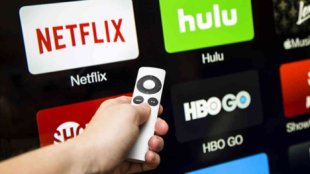 (Source) Last year more Americans subscribed to streaming services (69%) than traditional cable or satellite TV (65%). These internet-based television services, such as Netflix, Hulu, and Amazon Prime, are referred to as over the top (OTT) services. OTT services are film and TV content streamed over an internet connection, in contrast to traditional TV which is provided via a cable or satellite connection. Streaming services are an increasingly large part of Americans’ lives. 43% of consumers subscribe to both traditional pay-TV and at least one video streaming service. Younger consumers are especially drawn to OTT providers with 88% of those aged 22 to 35 subscribing to streaming services while just 51% subscribe to traditional broadcast TV. This increasing proliferation of streaming television is having a wide-ranging impact. It is significant to content producers, consumers, and even the financial industry.  It also brings about many regulatory questions. One of the biggest questions is whether or not to define OTT services as multichannel video programming distributors (MVPDs). MVPDs are essentially TV providers who provide multiple channels, such as your classic cable or satellite provider. Some people in the industry have begun referring to OTT providers that provide consumers with not just standard [read more]