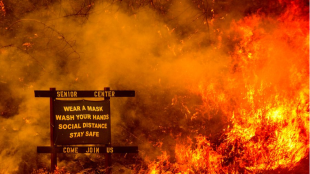 (Source)   We have all seen the headlines running about the raging forest fires in California and neighboring states. This past summer, dozens of extremely large forest fires ignited across the state of California, ruining rural and suburban communities, damaging and killing wildlife, and covering cities across the U.S. in a smoggy haze. Forest fires are common to California and neighboring states, and fire season always poses a challenge to the state, but over the past ten years, the fires have been larger and more destructive than ever before. From 2001 to 2010, California saw 7.03 million acreage of their land destroyed by fires; from 2011 to 2020, the number increased to 10.3 million acres. Yet, 2020 has topped every year with the largest and most destructive forest fires in California’s history: around 3.2 million acres of land being destroyed (as of September). And, to give a sense, San Francisco is “only” 30,000 acres. Coinciding with traditional attempts to stop the spread of these record-breaking fires, hundreds of firefighters have been deployed, along with calls for mutual aid. However, this reactive means of firefighting has proven to be almost hopeless, for the fires are too large and powerful for humankind [read more]