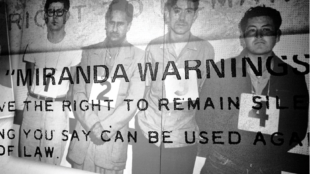 (Source) In the past twenty years, American law enforcement and the Federal Bureau of Investigation have increased their presence abroad. This increased presence is due in part to terrorist attacks against American targets and narcotics trafficking that affects U.S. citizens. Law enforcement’s role overseas is to investigate violations of American criminal laws committed by non-U.S. citizens. An integral component of the investigation process includes interrogating suspects. In the United States, any interrogated suspect is constitutionally protected by the Fifth Amendment right against self-incrimination. However, does this same right apply to non-citizens abroad? Per circuit courts’ understanding, the Fifth Amendment still applies in offshore interrogations. What is less clear is how this right must be given effect when interrogating non-citizens. Miranda v. Arizona and its Framework Domestically, the Fifth Amendment right against self-incrimination protects suspects during pretrial investigations. In the landmark case Miranda v. Arizona, the Supreme Court held that prosecutors may not use statements, whether exculpatory or inculpatory, stemming from the custodial interrogation of a detainee, unless the prosecution demonstrates the use of procedural safeguards. These safeguards ensure the privilege against self-incrimination. Miranda, therefore, mandates that before engaging a suspect in custodial interrogation, law enforcement officials must inform the suspect [read more]

Introduction The law of eminent domain in New York is an area characterized by its lack of clarity.   How cities and municipal corporations operate within the limitation imposed by the phrase “public use” is a particularly complicated area.  Recently, they have begun to assert a more expansive interpretation of this phrase, following the national trend of broadly reading the U.S. Constitution in cases like Berman v. Parker and Kelo v. City of New London.[1] However, the U.S. Constitution is only one constraint on the eminent domain power.  The New York Constitution functions as a separate limit.[2] However, rather than explicitly rule on the independent vitality of restrictions in the New York Constitution, the Court of Appeals has repeatedly reserved judgment on the issue.  This has left open the question of whether New York recognizes the economic development as a public use, as the Supreme Court has declared the U.S. Constitution permits.[3] Because the Court of Appeals has not ruled on this point, significant confusion has resulted.  Any independent limitation on the eminent domain power retained in the state constitution has essentially been rendered meaningless.  This uncertainty is itself damaging to private property interests within the state. The Case for Not [read more]