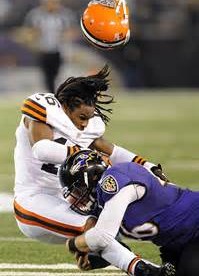 Football is ingrained in American culture. This has been evidenced by the fact that professional football has been voted as America’s favorite sport for thirty years straight. Furthermore, the recent Super Bowl 50 garnered 111.9 million television viewers. And the National Football League (“NFL”) grosses over seven billion dollars annually. Yet, despite our country’s attraction to the game, there are some serious dangers that lurk in the background.

Football is a physical sport and with this physicality comes many associated health risks. Besides the long-recognized risk of broken bones and torn ligaments, recently, the risk of long-term cognitive problems have become a salient issue. A few months ago, the movie Concussions was released, starring Will Smith, which further shed light on this matter.   The NFL has even admitted that “it expects nearly a third of retired players to develop long-term cognitive problems and that the conditions are likely to emerge at ‘notably younger ages’ than in the general population.” For example, the NFL’s report found that “[f]ormer players between 50 and 59 years old develop Alzheimer’s disease and dementia at rates 14 to 23 times higher than the general population of the same age range.” Furthermore, the report also stated that players between 60 and 64 may be as much as 35 times more likely to develop these illnesses.

Suffering repeated concussions is a leading cause of latent or patent cognitive issues in the football world. In response to the growing public concern over concussion-related health issues, the NFL has toughened up on their concussion protocol to the benefit of their current players. These stricter rules also came in response to numerous lawsuits that were filed against the league.

More than three years ago, thousands of former players brought a class-action suit against the NFL for head injuries they sustained throughout their careers. Throughout this dispute, the defense attorneys attempted to argue that the former players assumed the risk of potential head injuries when they accepted their jobs and as such, the league should not be liable. On the other hand, the former players argued that they were not aware of the extent of possible injury and that the league was negligent in their failure to inform them of the potential risks.

A settlement was eventually agreed upon which awarded millions of dollars to former players. However, some players were not satisfied with the settlement’s scope of coverage and decided to appeal. Their main concern is that the settlement does not grant any damages to those who may be living with Chronic Traumatic Encephalopathy (“CTE”).

The Boston University CTE Center defines the disease as “a progressive degenerative disease of the brain found in athletes (and others) with a history of repetitive brain trauma, including symptomatic concussions as well as asymptomatic subconcussive hits to the head.” The problem with including CTE within the settlement’s coverage is that although symptoms of the disease may be detectable in the live individuals, the disease cannot be actually diagnosed until after death.

Many studies have been conducted surrounding CTE and some of the findings can be shocking. One study found that “[o]f 91 former NFL players who donated their brains for research after death, 87 tested positive for CTE, a debilitating condition that can cause depression, aggression and loss of memory and motor skills. Of those 87 players, 35 were former offensive or defensive linemen, which researchers say suggests repeated minor head trauma, not just major concussions, can cause CTE.” Another study found that 101 out of 128 “football players who, before their deaths, played the game professionally, semi-professionally, in college or in high school . . . tested positive for CTE.”

Given CTE’s widespread diagnosis, it is easy to see why those appealing the settlement would want the disease to be covered. To date, the appeal has not been ruled upon but the suit itself poses some interesting questions. Who should bear the risk of these head injuries? Does it seem just to fail to compensate former football players for a disease that is so prevalent among them? Has the NFL done enough to combat the dangers of playing such a physical game?

The NFL concussion suit has also spurred further litigation, such as a lawsuit filed against the National Collegiate Athletic Association (NCAA). Will more litigation continue to pop up? When the dust finally settles and the NFL concussion suit comes to an end, will the same emphasis be placed on minimizing concussions? One would hope the answer to the latter would be yes because it is important that the NFL continue to set a precedent that concussions should be taken seriously.