According to Senator Gilbert Rodriguez Valle, the controversial bill “aims to improve children’s well-being and help parents make healthier choices.” Under the proposed scheme, teachers are required to report obese or overweight children to Department of Health officials. The officials would then meet with the child’s parents to identify the root cause of the child’s obesity. If it is determined that the child is obese or overweight because of poor eating habits, officials will educate the parents on the health risks of being overweight and create a diet and exercise plan for the child.

If, after six months, education officials determine that the child’s condition has not improved, a staffer can refer the case to child-family services authorities as one involving abuse or mistreatment. If after another six months the situation persists, the parents can be assessed up to $500 in fines. Six months after that, if the problem continues, the parents can be fined an additional $800.

Childhood obesity is a serious problem. According to the Center for Disease Control, a child is obese if that child’s Body Mass Index (BMI) is at or above the 95th percentile for children of the same age and sex and overweight if the child’s BMI is above the 85th percentile. Moreover, children who are obese or overweight face a myriad of health problems including high blood pressure, diabetes, breathing problems, joint problems and musculoskeletal discomfort, fatty liver disease, gallstones, and gastro-esophageal reflux. Obese and overweight children are also more likely to experience social and psychological problems, including bullying, discrimination and low self-esteem. Today nearly one in three American children are obese or overweight. Among minorities the situation is worse. In African American and Hispanic communities nearly 40 percent of all children are either overweight or obese. In Puerto Rico, the obesity rate for children is nearly double compared to that of the continental United States.

Puerto Rico’s proposed bill is not the first effort by officials to combat the very serious problem of childhood obesity. In 2010, Michelle Obama announced that she would be using her considerable influence and resources to tackle the problem. The Let’s Move Campaign, unlike Puerto Rico’s new bill, aims to end childhood obesity in one generation by improving school lunches, inspiring children to make healthier eating choices, and encouraging kids to increase their daily activities. Despite the seemingly different approaches, campaigns such as Let’s Move and Puerto Rico’s proposed bill often face similar problems and completely fail to address many of the underlying issues at the heart of childhood obesity.

Obesity Is a Disease Not a Choice

In 2013, the American Medical Association officially recognized obesity as a disease. As such, any program targeting the problem should take into consideration the many complex issues underlying the disease. Yet, Puerto Rico’s new bill does the opposite. It does not call for the involvement of any medical official, such as pediatricians or nutritionists. Dr. Ricardo Fontanet, president of the Puerto Rico chapter of the American Academy of Pediatrics, points out that the bill requires teachers who have little training or knowledge of BMI, to identify children.

they believe are obese. Asking teachers to single out children they believe to be obese or overweight sends a wrong message. One blogger contends that this is a new form of fat-shaming which will subject kids to “further stigma and shame by the people who are supposed to educate and encourage them.” Similar critiques have been raised regarding the Let’s Move Campaign. “It can’t be denied that childhood obesity is an issue in America, said Evette Brown. But “focusing the spotlight on children who are constantly on display may help them lose weight, but it also forces them to lose something that will benefit them as much as good health-–confidence.”

Instead of addressing the underlying issues and helping parents make healthier choices for the children, the bill uses arbitrary deadlines to encourage fast weight loss. This is highly problematic because “many known and unknown biological factors, in addition to personal nutrition and physical activity decisions, may interfere with weight loss, reinforcing the fact that we can’t treat obesity solely by placing the blame on parents or individuals,” explains Dr. Nikhil Dhurandhar, president of the Maryland-based Obesity Society. Moreover, the emphasis is placed not on education but on scaring parents into believing that unless they can get their kids to lose weight they may be branded child abusers. “Parents don’t need a task force, government program, or mandated bigger nutrition labels to tell us that Oreos, Hot Pockets, Dr. Pepper, and Big Macs can make kids fat,” said Rachel Campos-Duffy. What is needed are programs which aim to change the lifestyle of entire families. Helping an entire family adopt a healthier lifestyle is a much more effective solution to the problem at hand. 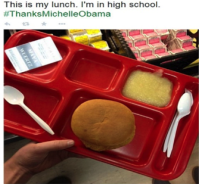 Another problem that is ignored is the role that economic power can play on food choice. As of January 2015, 12.4 percent of Puerto Rico’s population was unemployed; in 2012 45.6 percent were living in poverty and according to the Annie E. Casey Foundation’s Kids Count Data Book, over 83 percent of Puerto Rico’s children were living in “high poverty areas.” For many parents in Puerto Rico, eating healthy is not an option. “Not everyone has the money to eat as healthily as they should,” said one Puerto Rican mother interviewed by the Guardian. “Puerto Ricans have big families, on average two to five kids, and that’s a lot of food to buy and a lot of time to prepare it. It’s easier and quicker to go out.” 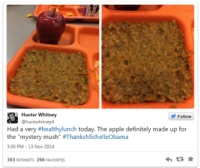 The solution is not to supply children with less food. In 2014, the popularity of the sarcastic Twitter hashtag #ThanksMichelleObama, highlighted a real problem in the Let’s Move Campaign’s quest to improve school lunches. Under Michelle Obama’s guidance, Congress passed the Healthy, Hunger-Free Kids Act. Under the act, schools are required to adhere to specific guidelines, such as instituting a calorie cap for school lunches and providing students with fresh fruits, vegetables and whole grains. Instead of showing kids that eating healthy can be fun, the new school lunches angered parents and left kids unsatisfied. Meanwhile, kids are bombarded with fast food advertisements featuring fare that seems much more appetizing. Thus, it is obvious that the current strategies are only encouraging kids to develop unhealthy relationships with food while simultaneously shaming parents who are only trying to feed their families the only way they can afford. Instead, the focus should be on the affordability of healthy food choices and on lobbyists who impinge lawmakers’ efforts to get healthier foods in schools.