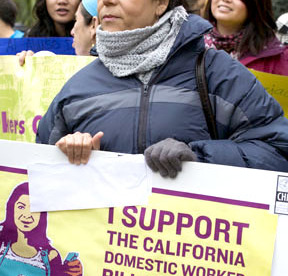 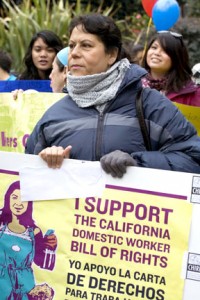 On October 1, 2012, Governor Jerry Brown disappointingly vetoed a bill that would have regulated and provided protections to domestic workers and would have guaranteed them decent working conditions and pay.  The Domestic Workers Bill of Rights or California AB 889, would have entitled domestic workers such as housekeepers, nannies, and caregivers for children, persons with disabilities, and the elderly, work[ing] in private households to overtime pay, workers’ compensation, and time for meals and rest breaks.

These regulations are particularly important for domestic workers who live in the home with their employer.  Indeed, live-in domestic workers are the most vulnerable to labor abuse because of their constant physical availability to the employer and because many are isolated from their family and community—they face a greater threat of violence, harassment, rape, and physical and mental abuse.  California’s legislation would have extended special protections to this population by, for example, allowing them the right to eight hours of sleep and the right to use employers’ kitchens to cook their own food.

From a labor law standpoint, these are not “new” rights by any means.  Indeed, the eight-hour work day, overtime policies, and meal requirements are the cornerstones of the Fair Labor Standards Act, passed in 1938. However, because domestic workers are excluded from the Act, they remain largely unprotected by these labor laws and also remain unable to collectively bargain for decent working conditions.  Additionally, because the population of domestic workers is largely foreign-born and isolated in the private homes, they have a limited ability to organize and advocate for themselves.

There are also mental health implication for live-in domestic workers and unregulated working standards for domestic workers. Indeed, research on social isolation has revealed that such conditions make individuals inherently vulnerable to mental illness.  For example, social isolation after giving birth is associated with the onset of postpartum depression in new mothers.  Because such a solitary environment can have such deleterious effects on mental health on mothers, clearly domestic workers such as housekeepers and nannies may suffer from the same effects of isolation and such symptoms may be more salient in the context of having to care for children that are not your own.

Protecting the mental and physical health and working conditions of domestic workers is clearly important given their responsibility in American households: they are caring for our children and living in our homes. States have a responsibility to extend labor protections to this inherently vulnerable population of workers.