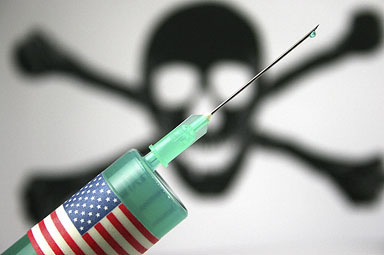 Texas executed the first person by lethal injection, a 40-year-old male named Charlie Brooks, in 1982,. Since then, 1229 people have been executed using lethal injection. During their executions, the prisoners are strapped on a gurney with IVs inserted in their arms as the drugs first render them unconscious, then paralyze them, and finally stop their hearts, killing them.

In my not-so-humble opinion, this alone is enough to argue that this is a violation of the Eighth Amendment’s ban on Cruel and Unusual Punishment, but since that’s not the case according to the nine, whose opinions actually matter, we will have to wait and hear from them at the end of this term.

Until 2009, the intravenous injection was a series of three drugs injected in a set sequence: sodium thiopental or pentobarbital (an anesthetic that renders the prisoner unconscious, although in lethal-injection doses the drug will kill the prisoner even without the following two drugs due to lack of breathing), pancuronium bromide/Pavulon (a paralytic agent that causes paralysis of the skeletal striated muscles, including the diaphragm, that would eventually cause death by asphyxiation), and potassium chloride (a drug that stops the heart and causes death by cardiac arrest). The last two drugs are known to cause torturous suffocation and pain, without effective sedation.

However, death is expensive, and due to drug shortages, states have recently adopted new lethal injection methods. Eight states have used just one drug (a lethal dose of an anesthetic), fourteen states have used pentobarbital, and four states (Florida, Oklahoma, Ohio, and Arizona) have used midazolam, a short-acting central nervous system depressant.

Ohio’s execution with midazolam was botched when the death-row inmate Dennis McGuire gasped audibly for air, clenched his fists, and strugged the entire time. Likewise, in Arizona, Joseph Wood was gasping and gulping for an hour and fifty-seven minutes, while he had been injected with 750mg each of midazolam and hydromorphine; fifteen times the amount called for in the lethal injection protocol.

Oklahoma’s use of midazolam was also botched. Twice. In January 2014, Michael Lee Wilson was executed and twenty seconds after the execution started, his last words were “I can feel my whole body burning.”

On April 2014, Clayton Lockett, died 43 minutes after being “sedated” and after the procedure was stopped. The medical technician first inserted midazolam and ten minutes later, the doctor announced that Mr. Lockett was unconscious and they started to administer the next two drugs, the paralytic and the potassium chloride. However, Mr. Lockett began to writhe and gasp, called out “oh man,” his body twitched, his foot shook, he tried to rise, and he exhaled loudly. Prison officials pulled the curtain in front of the witness and Mr. Lockett died of a heart attack in the execution chamber after the execution was halted. Cruel and Unusual Punishment? We’ll find out.

On April 29, 2015, a year to the date of Clayton Lockett’s execution, the Supreme Court will hear oral argument in Glossip v. Gross. In this case, three Oklahoma death-row inmates are arguing that midazolam does not properly induce unconsciousness and causes a painful and agonizing death. The Supreme Court has stayed the remaining executions in states using midazolam pending resolution of this case.

The Supreme Court last considered the constitutionality of lethal injection protocols in 2008, in Baze v. Rees. The Court held that a three-drug cocktail did not violate the Eighth Amendment. Petitioners claimed that the improper administration of the first drug, the sedative that would render the prisoner unconscious, leads to a painful death constituting cruel and unusual punishment. The Court stated that although “it is uncontested that, failing a proper dose of [the sedative] that would render the prisoner unconscious, there is a substantial, constitutionally unacceptable risk of suffocation from the administration of pancuronium bromide and pain from the injection of potassium chloride,” petitioners did not show that the risk of an inadequate dose of the first drug was substantial. The Court held that to constitute cruel and unusual punishment, an execution method must present a “substantial” or “objectively intolerable” risk of serious harm. Also, the Court held that a state’s refusal to adopt proffered alternative procedures could violate the Eighth Amendment “only where the alternative procedure is feasible, readily implemented, and in fact significantly reduces a substantial risk of severe pain.” And this is where we stand today.

As high as the Supreme Court set the standard on lethal injection protocols violating the Eighth Amendment, it’s hard to imagine that what we have learned from the botched executions using midazolam doesn’t show that this protocol crosses the constitutional line. Although the Court’s composition has changed since Baze, it is unlikely that Justice Sotomayor and Justice Kagan will vote to uphold Oklahoma’s lethal injection protocol. On January 15, 2015 the Court denied the request for a stay of execution of Charles Warner, another Oklahoma inmate, with Justices Sotomayor, Ginsburg, Breyer, and Kagan dissenting and Justice Sotomayor stating that although the inmate should be punished for his crimes, “the Eighth Amendment guarantees that no one should be subjected to an execution that causes searing, unnecessary pain before death.”

However, the issue is trickier than it seems and gets quite thorny when you take into account that sodium thiopental, the alternative to midazolam, is not readily available. The last American drug maker to produce sodium thiopental withdrew from the market five years ago and the European Union has put in place an embargo of lethal-injection drugs, putting the substances in question on a list of controlled exports that could be used on “capital punishment, torture, or other cruel, inhuman or degrading treatment or punishment.”

So, if the Supreme Court finds that protocols using midazolam are unconstitutional, and the states cannot get their hands on sodium thiopental, the states need to find some other way to kill their death-row inmates, or halt executions.

Knowing that the drugs used cannot be trusted and that difficulties in obtaining lethal injection drugs stem largely from transparency issues, death penalty states have increasingly passed legislation cloaking their lethal injection procedures in secrecy.  Thirteen states are shrouding their executions in secrecy. Arkansas, Arizona, Florida, Georgia, Idaho, Missouri, North Carolina, Oklahoma, Pennsylvania, South Dakota, Tennessee, Texas, and South Dakota. The Supreme Court will not review state secrecy laws, or possible drug alternatives, in  Glossip v. Gross, but it’s safe to say that any way the Court comes down in this case will affect the execution of death sentences in America in many respects.