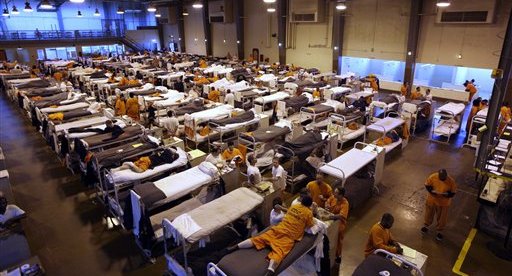 Credit: Eric Risberg of the AP

Credit: Eric Risberg of the AP

California prisons are no strangers to bad press. Just a few months ago, the Supreme Court condemned the state’s correctional facilities [PDF] for violating inmates’ Eighth Amendment right to be free from cruel and unusual punishment. After Schwarzenegger took the governorship in California in 2003, he expressed outrage at runaway incarceration in California, questioning the state’s moral compass when it “focuses more on prison uniforms than on caps and gowns.”

There is a paradox in the bad press: if we are spending so much on prisons, then how is it that prisoners are still living in conditions so deplorable that they violate the prisoners’ Constitutional rights? It doesn’t add up.

California has a unique villain, an incredibly powerful lobby that has undoubtedly contributed to the severity of the state’s prison problems: the California Correctional Peace Officers Association (CCPOA).

As with any powerful lobby, money talks. The CCPOA has plenty of it—over 97% of the state’s correctional officers are organized, and members pay $59 in monthly dues. With 31,000 members, we’re talking $21.9 million annual income—a veritable arsenal that has been the most valuable player in making the state’s penal system more punitive in nature. “While prison guards can appear as a less-than-sympathetic group in the public eye, the mother of a murdered child serves as a powerful tool when trying to strengthen punitive laws.” CCPOA Info Sheet (PDF).

Even in “maximum-security” prisons, California’s inmates are constantly caught with contraband drugs, weapons, and even cell phones—which enable them to continue posing a threat to communities while locked up. Earlier this year, Charles Manson was caught with a cell phone—his second cell phone in two years—at California’s maximum-security Corcoran State Prison. Just how are the prisoners getting their hands on this contraband? Moreover, how could one of the most infamous criminals in California history get his hands on a cell phone—twice?

“Prison employees, roughly half of whom are unionized guards, are the main source of smuggled phones that inmates use to run drugs and other crimes, according to legislative analysts who examined the problem last year. Unlike visitors, staff can enter the facilities without passing through metal detectors.”

While extensive airport-style security screens are required for all attorneys and inmates’ visitors, security guards are not subject to these searches. When California legislators sought to change this, the politically powerful CCPOA pointed out that they would have to be paid for the extra few minutes that a daily search would add to their workdays. This, according to the CCPOA, would inevitably add up to cost taxpayers millions.

So what is happening now? The guards are still walking in and out of California’s maximum-security prisons every single day without being screened. Moreover, while smuggling cell phones is against prison rules, it isn’t even against the law yet.

According to The Smoking Gun, an online media outlet known for its controversial document leaks, the going rate for a smuggled cell phone in Manhattan-area jails is $2,500. The corrupt guards who benefit from this scheme will lose a huge source of supplemental income should they be forced to undergo security screenings. Given the gains that guards stand to make when public policy is in their favor, it is no surprise that CCPOA’s political activity routinely exceeds that of all other California unions. The CCPOA has a lot to lose.